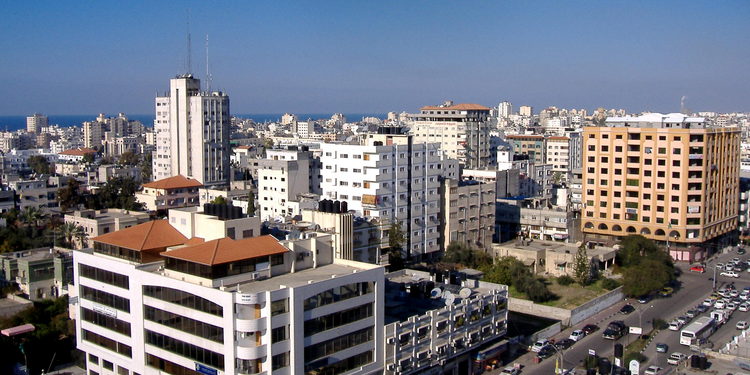 The Gaza strip (Palestine) is a coastal land of 360 square meters with around 1.8M people living and working there. The strip has long suffered from various crises since the closure imposed on it in 2007, and has witnessed 3 consecutive devastating wars ending in late 2014. Given its extreme conditions and everyday problems, the Gaza strip has one of the toughest business environments in the world.

Still, these problems have created a fertile ground of opportunities and possibilities for development and innovations from startups. Starting from 2010, the support for youth and entrepreneurship activities has been on the rise, and Gaza has witnessed a boom in the number of newly created startups that aim to solve some of its livelihood problems. The following profile sheds light on some of the notable startups in Gaza, the structure of the startup ecosystem and its main players, and major events and resources within this startup community.

● 5QHQH
Aiming to become the 9gag for MENA region, 5QHQH (read “Qahqaha” meaning “laughter”) has secured a series A investment from Ibtikar fund, and had an incoming traffic of over 30,000 visitors in the few weeks following its launch.

● Baskalet
A developer for smartphone apps & games targeting Arabic speakers, Baskalet (meaning “bicycle”) has developed a few notable Android & Ios apps that have received over half a million downloads. Launching in 2015, the startup has a dedicated developer team and have participated in regional startup events.

● Fos7a
A Tourism based startup (read as “Fosha” and means “a trip” ) that specializes in holding tours, summer camps, organizer of events, and initiator of the “Kids CInema” in Gaza.The startup has received one of 2016 World Summit Awards (WSA)- Palestine version, as well as the 2014 Taawon Youth Award.

● Haweya
A design house and one of the notable local outsourcing stories, this startup started as an idea and within a few years grew into a 20-person firm working mostly on designs for regional high-profile clients.

● Green Cake
With its limited resources and ongoing blockade, securing building blocks is a tough and costly task, one which this startup intends to change by producing durable building blocks with reusable materials. It has scored the first place in Japan Gaza Challenge 2016, and was nominated to join MENA’s MIT Business Competition in the same year.

● Tashkeel
With the ongoing blockade, importing specialist tools such as 3D printers into Gaza is fairly tough, so this startup has stepped in to fabricate 3D printers, plastic filament and offer 3D printing services.

What makes Gaza promising as a startup ecosystem

The last 6 years have seen a significant boost in the number of startups, incubators, startup events and resources. Although the community is still awaiting its first big success, the velocity of how startups are able to connect with customers and audiences in the region and internationally is notable. Many large scale organizations turn to the pool of talents in Gaza for service provision in various high and low tech fields while a number of startups have secured series A VC funding with potential for growth.

Although filled with talent and innovative graduates, the Gaza strip is living under an ongoing blockade that has caused tremendous economic losses for factories, businesses and individuals. Gaza has the highest unemployment rate in the world as per the World Bank of around 44%, and suffers from a devastated infrastructure, power shortages, and many other problems. Entrepreneurs in particular face the dilemma of not being able to travel or meet investors and customers abroad, in addition to other problems including the inability to accept online payments for their tech services (Paypal and other similar solutions do not work in Palestine), among others.

● Business & Technology Incubator (BTI)
Established at IUG in 2006 to help university graduates start their own startups and small businesses, BTI is a technology-based startup incubator that focuses on supporting existing startups. It has previously implemented the first televised startup competition in Palestine and worked with organizations including SPARK, BiD Network and UNDP.

● Gaza Sky Geeks
An accelerator and coworking hub that was started in 2011 by MercyCorps and Google to support startups and connect local entrepreneurs to global networks. It runs the annual Gaza Startup Weekend, Gaza Challenge, and other events. The accelerator has supported a number of startups, a few of them have gained investments from local and regional VCs.

● Mobaderoon
Starting in 2010, this was one of the first startup-incubation programs in the Gaza strip. It is run by IUG and supported by AF, IDB and Taawon. Mobaderoon supports entrepreneurs who have innovative startup ideas, and it has thus far created 60+ startups and is expected to graduate 20 additional startups by September 2016.

● Palestinian ICT Incubator (PICTI)
An ICT-based incubator supported by the Association of ICT companies in Palestine (PITA). PICTI offers incubation and commercialization services for entrepreneur and has implemented business competitions with support from Intel, PalTel Group, Oxfam and Danida.

● UCAS Technology Incubator
A hardware and technology-focused incubator, UCAS incubator works under the UCAS College, and is supported by Oxfam, KF and IDB. It offers training, seed funding and logistic support, and is currently constructing a specialized center of innovation in Gaza.

● Ibtikar Fund
A Ramallah-based investment firm, Ibtikar was founded by diaspora Palestinian businessmen and local Private Institutions (Namely Bank of Palestine). Launching in 2016, the fund has invested in a few startups including 5QHQH from Gaza.

Media resources for startups in Gaza

● Angelhack
An international two-day coding hackathon seeking to find the best coders who can join an international Hack-celeration program in the US.

● Get in the Ring (Ramallah)
A boxing-like international startup competition covering 64+ countries to help startups network and access investors. Mockapp (Gaza), Fadfid and Batuta were crowned as winners in the 2015 event.

● Seedstars (Ramallah)
An international innovation competition nurturing growth in emerging markets. First event was held in 2015 with startups from around Palestine competing.

● Startup Grind
As part of the global Startup Grind is a global community, this monthly event brought VCs, notable business leaders, and successful entrepreneurs to the startup community in Gaza and Ramallah.

● Startup Weekend
The 54-hour startup challenge takes place annually in Gaza and Ramallah, and has brought together the brightest minds from the local community with mentors and judges since 2011.

Despite tough business conditions, entrepreneurs in Gaza have managed to pave the way for development with their innovations. While difficulties necessitate the spirit of entrepreneurship, the Gaza ecosystem is in need of a better technological infrastructure and stability in the region in order to progress.

Rafat Abushaban (MSc, MBCS) is a startup mentor and speaker on topics relating to e-business, entrepreneurship, and crowdfunding. He is the Director of Startup Grind Gaza, Coordinator for Youth Program at Taawon, Contributor for Wamda, and Curator for Startup Digest. You can reach him on Linkedin or Twitter.

Azadi Tower in Tehran, Iran Click here to view Iran’s Startup Map Introduction to Iran Startup Ecosystem Tehran is the capital of Iran and Tehran Province. With a population of around 9 million in the city and 16 million in the wider metropolitan area, Tehran is the largest city and urban area of Iran, the […]
Written by StartupBlink February 27, 2017November 19, 2020

Click here to view Warsaw’s Startup Map Introduction to the Warsaw startup ecosystem Warsaw is the capital of Poland and has slightly more than 1.7 mln residents. It’s also Poland’s biggest city and education levels are high, thanks to a huge number of colleges. People come to work here from many nearby and far-away cities […]
Written by StartupBlink August 25, 2016March 5, 2021

Overview of South America’s Startup Ecosystem South America as a continent is becoming a more welcoming environment for startups, with 9 countries in the top 100 including Brazil, Chile, Argentina and Colombia. This part of the world is becoming a hub for startups with promising innovation strategies, investment opportunities and rapid market growth.  In 2020 […]
Written by StartupBlink March 3, 2021March 11, 2021

Somalia has a population of almost 16,000,000 people and is Africa’s most culturally homogenous country with 85% of citizens ethnic to Somalia. Somalia was first featured in the global rankings of the StartupBlink 2020 Startup Ecosystem Ranking Report at rank 95. This is a relatively strong position considering the last 30 years of Somalia’s history.  […]
Written by StartupBlink February 18, 2021March 5, 2021

Click here to view Bordeaux’s Startup Map Introduction to Bordeaux Startup Ecosystem Located in the southwest, Bordeaux is the 9th city of France with more than 240 000 inhabitants, and the 2nd in terms of economic attractiveness (right after the city of Lyon). Used to be called “La belle endormie” (the beautiful asleep) as it […]
Written by StartupBlink August 10, 2016March 5, 2021

Click here to view Budapest’s Startup Map Introduction to Budapest’s startup ecosystem Situated along the Danube River in Europe, Budapest has mesmerized many with its beauty and vibrancy. But of late, a new buzzword is doing the rounds of the city: startups. The city is bursting with new ventures, and helping their development are co-working […]
Written by StartupBlink September 8, 2015March 29, 2021
Next