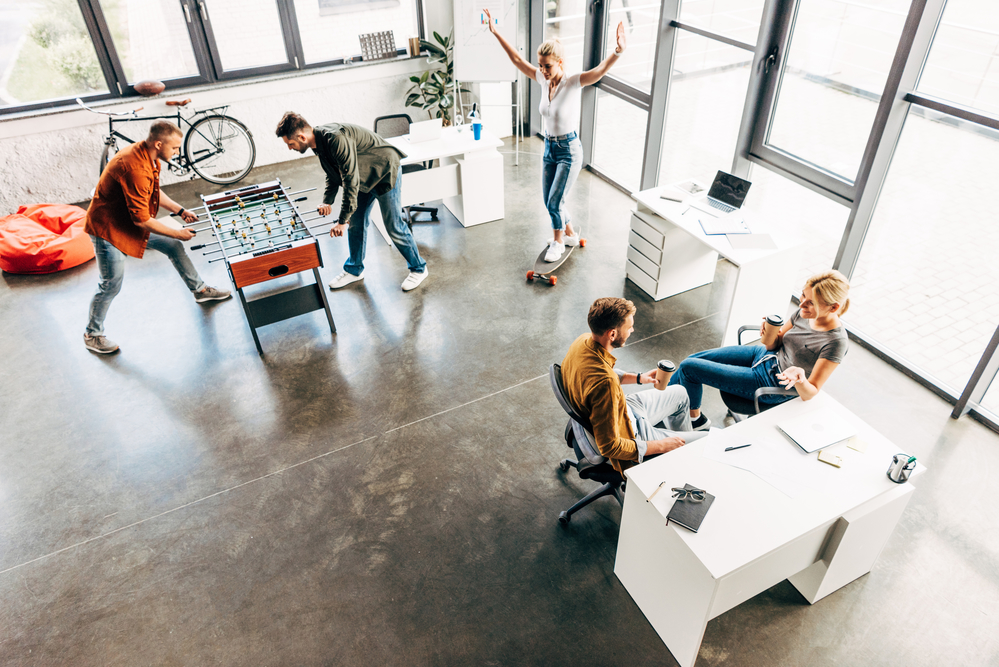 Whether you are an entrepreneur, creative soul, freelance genius or someone with a mind blowing startup idea, it soon becomes a necessity to have the right environment to generate and share ideas with like minders, and regular office, in that case, is not always an option for everyone. StartupBlink has been collaborating with WeWork and offers a great opportunity to get up to 15 % off of any location around the globe using this link of WeWork.

Followed by the idea of sharing economy, WeWork, American coworking leader, is changing the way we work. This startup offers shared workspaces around the world. From high-speed Wi-Fi connection, meeting rooms, printers to free drinks and office suppliers-at WeWork, one does not need to worry about small details and can fully focus on the business. Unlike a regular office, the environment at co-working spaces encourages to build connections, share great ideas and grow together with a goal-driven community. Not even mentioning all the business, science, tech, self-development and other events happening at such places!

WeWork was launched in New York back in 2010 by two ambitious men, Miguel McKelvey and Adam Neumann, who wanted to build more than a pretty, shared office. They wanted to build a global community where a great individuality contributes to even greater communality. However, the actual beginning of this idea was way earlier. Both of the men did a “try out” of a building they both worked at to check if their idea could be successful. As the building still had some open places for co-workers, they convinced their landlord to rent it out to other entrepreneurs. Finally, after some discussions, in 2008 a brand new startup took the stage and was presented to the public under Green Desk’s name. Back then, no one could have ever guessed that the company which main focus was workspaces with recycled furniture and wind power electricity will eventually become WeWork- a startup uniting 250 000 members across the continents.

WeWork office locations around the globe

By the end of 2010, an actual WeWork launching, they only had 2 offices. The beginning was not the fastest, but rather extremely constant and well-thought. Following their success, a year after, in 2011, they doubled the number of their offices. The company was always moving forward and at the moment WeWork has 477 office locations in 95 cities around the world.

The highest density of the WeWork coworking spaces is in the North America and it makes around 42 % of all the offices. The tenants have a great freedom to choose places from 27 cities both in the USA and Canada, and offices in 7 new cities, including Baltimore, Boulder, Las Vegas, Phoenix, Pittsburgh, Salt Lake City and San Antonio are coming soon.

WeWork is also present in Europe’s most popular nomadic and tech cities and is currently open in France, Germany, Ireland, Netherlands, Poland, Spain, Sweden and United Kingdom with 85 offices, making around 18 % of all WeWork locations. In the nearest future, WeWork community will be welcome in more European cities, starting with Belgium, Czech Republic, and Italy.

Another 11 % of all the other offices are distributed in South America. They are situated in such countries as Argentina, Brazil, Chile, Colombia, Guadalajara, Mexico and Peru. WeWork is preparing for a massive expansion in Brazil with new offices in Brasilia, Curitiba, and Porto Alegre as well as a new location in Barranquilla.

Wonder if there are some offices in other parts of the world? Surely, there are! WeWork coworking spaces are also opened in Asia. China, India, Indonesia, Japan, Malaysia, Philippines, Singapore, South Korea, Thailand, and Vietnam are the cities . Even Israel, despite its comparably tiny size, has 11 office locations in 5 cities.

Talking about Australia, it can also brag of having 15 WeWork offices around the country. They are located in Brisbane, Melbourne, and Sydney. First WeWork landed in 2016 in Sydney, Martin Place, occupying three floors of the old Money Box building.

Top 5 countries with the most cities having WeWork offices

WeWork is excited for 2019 and is looking forward to opening even more co-working places in the North America, South America, Europe and Asia. Also, by the end of the upcoming year, they are hoping to double the number of WeWork members across the globe. Besides expansion of its main project, this startup is testing different fields. Just a year ago, WeWork presented a co-living project WeLive. The idea behind is to rent out all inclusive shared flats with several services like internet connection or cleaning. The main target is the members of WeWork community. WeLive offers both long and short term rent and challenges traditional living. Taking all that in mind, in 2019, WeWork team is to work even harder focusing on the main project and trying to further develop the newer ones. Want to be part of this inspiring community? Wait no longer and check WeWork now!

Click here to view StartupBlink’s Coworking Map The concept of coworking In this article we will discuss the Benefits of joining a Coworking Space for Startups. Founding your own startup is a lonely task, every startup founder will vouch for this. Joining a startup is an interesting option for startups and their teams to consider. Coworking […]
Written by StartupBlink January 30, 2016March 29, 2021

Latin America is soon becoming an innovative hub for startups. Topping amongst all the Latam cities is Santiago which is attracting startups, investors and accelerators alike. To support its budding startup ecosystem, many new coworking spaces have sprouted in the city offering plush offices, around-the-clock coffee, great conference rooms and yoga/gym facilities. As a strong […]
Written by StartupBlink August 14, 2018November 19, 2020

With the increasing number of WeWork locations and members using this world’s famous coworking space brand, WeWork has decided to take a step further and offer entrepreneurs to join a very interesting initiative- WeWork Labs. Eligible members can join this innovative platform with a slight increase in the regular price of their coworking package. Nevertheless, […]
Written by StartupBlink September 5, 2019November 19, 2020

WeWork, a StartupBlink partner and the world’s biggest coworking global chain is now offering StartupBlink members up to 15% discount on dozens of WeWork office locations. Firstly, a quick introduction about WeWork and the benefits of joining their coworking space is due. WeWork was started by Adam Neumann and Miguel McKelvey. And is effectively creating […]
Written by StartupBlink July 25, 2018November 19, 2020

Founded in 2010, WeWork has sure come a long way. With a global presence of 399 office locations in 78 cities (and growing exponentially as we read!), WeWork is revolutionizing the coworking industry. It was started by Adam Neumann and Miguel McKelvey in New York. WeWork is the biggest global coworking chain. Coworking globally is […]
Written by StartupBlink July 20, 2018November 19, 2020
Next