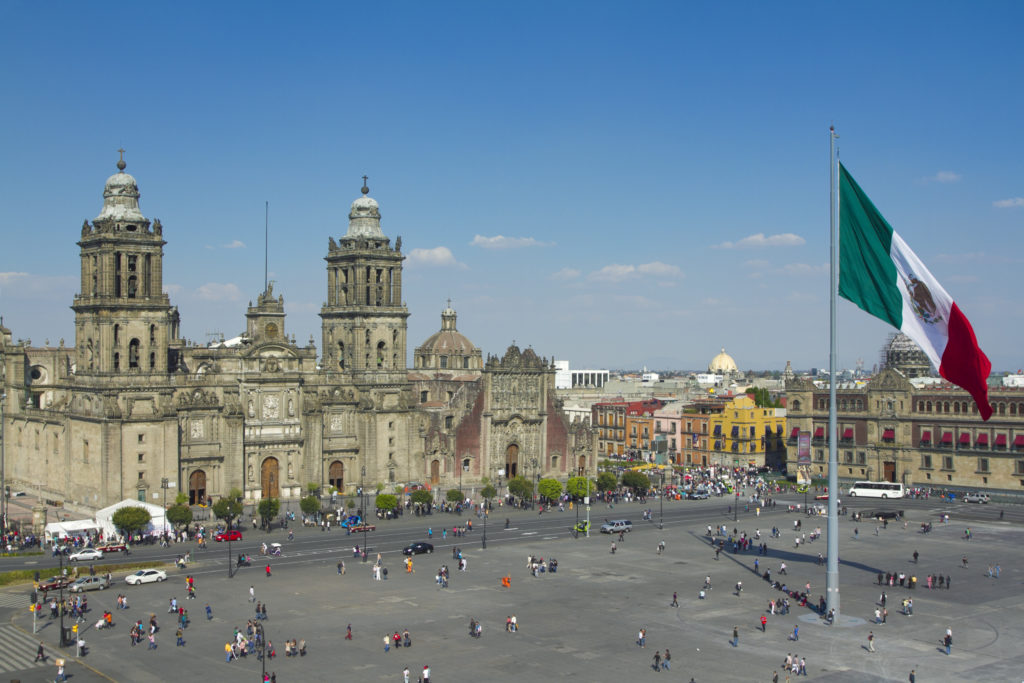 As soon as you land in Mexico City, its immensity astonishes you, and once you get closer, you get to appreciate the architectural variety dressed up in an extensive palette of colors. As far as the startup ecosystem of Mexico City goes, there are many opinions, some quite short-sighted, regarding its origins. In StartupBlink’s 2019 report, Mexico City ranked 1st in Mexico and 47th globally.

Let’s take a look at some entrepreneurial data: The total early-stage of entrepreneurial activity is present in 19% of the population, a number that has been increasing. This figure places Mexico as the highest in comparison to other countries on the innovation-driven stage of development[1]. Further, according to the Global Entrepreneurship Monitor (GEM), in Mexico, the total early-stage Entrepreneurial Activity rates (TEA), have shown constant growth, moving from 9.6% in 2011 to 19% in 2014, which is above the average 17.6% rate of Latin America countries[2].

Most successful startups in Mexico City

Here are some success stories of startups in the Internet industry:

Advantages of Mexico City as a startup destination

Some of the main strengths of Mexico City start with its young vibrant economy, a growing middle class, and a population of hard workers –a key quality for startup’s founders to succeed.

Developing Economy: According to the OECD, the total number of hours worked per year by Mexicans is 2,237 hours, which places Mexico at the head of the rest of other OECD members, even above Korea[3]. Further, Goldman Sachs’ calculations predict that Mexico will be the 5th largest economy in the world by 2050[4]. Mexico is a centralized country in which the heads of the State and businesses’ headquarters reside in the capital, Mexico City, and 54% of entrepreneurs start their business in it[5].

World-class talent: Mexico City is a cosmopolitan city that opens its doors to the foreign talent that wants to make Mexico their home or their startup battlefield; this is a major indicator of a healthy, and attractive economy of ideas, such as the one in Silicon Valley and in Tel Aviv. The most common nationalities are first Spanish, followed by Argentinians, Colombians, Americans, French, and Germans[6]. Language and culture is not an impediment for our adopted residents that find their residence in Mexico City’s boroughs, mainly in Miguel Hidalgo, Benito Juárez and Cuauhtémoc, or open their offices in La Roma and La Condesa districts, popular areas for startups.

Availability of capital: Entrepreneurial capital continues to increase due to satisfying returns. Mexico Ventures I, a fund of funds for entrepreneurial capital, contemplated a return with a multiplying effect of 6.1 USD, meaning that every 1 USD invested the return would be of 6 USD[7], not bad given that investing in the Dow Jones’s public companies gives you an average annual return that ranges between 4.5 to 7.5%[8]. Seed funding is also growing due to major initiatives taken by the government, and venture capital funds that keep increasing their investments in seed capital.  During 2012 to 2015, major steps were made to support startups, such as: prioritizing innovative startups, introducing new support instruments, and increasing financing[9]. Some examples of seed funding initiatives are the fund Fondo Mexico 2, which launched in 2013 with an amassed amount of US$500 M, and Fondo de Conversión de Capital Semilla, created in 2012. Additionally, INADEM oversees a network of programs for entrepreneurial development and seed funding, such as the Ecosystem Development Programs for Entrepreneurial Capital, which invested in 37 funds for early stage enterprises. Finally, during 2000 to 2014, the startup’s sectors that received the most funds from entrepreneurial capital were: first, e-commerce, followed by IT, financial services, education, and health, among some others (EY).

Vibrant entrepreneurial community: The local entrepreneurial community is getting stronger, just recently ITESM university along with ASEM (Entrepreneur Association of Mexico), drafted a bill they named Empresas en un Día, Costo Cero (Enterprises in a Day, Zero Cost), its purpose was to shorten the legal, fiscal and bureaucratic red tape, as well as costs. Fortunately, collective efforts were not in vain, in view that the senate approved the bill[10].

Disadvantages of Mexico City as a startup destination

Not everything is a bed of roses; there are still areas than need to be improved. In accordance with Endeavor, local startup faces numerous difficulties with a 75% probability of failing the first year, this probability increases to 90% after 5 years[11].

Lack of infrastructure and tax problems: Some of the problems that startups face are a lack of proper infrastructure, as well as a lack of internal market openness. In addition, the tax system is complex and takes more out of the scarce entrepreneurs’ time than the rest of their Latam peers in the G20. Also, hiring is a risky business, since the cost of letting go, employees, is among the most expensive[12].

Aversion to risk: There are several complains regarding enough capital, or to be more precise, regarding venture capitalist, which are not considered risky enough, while at the same time, they ask for overinflated returns. The study, “The Power of Three: The EY G20 Entrepreneurship Barometer 2013”, rates Mexico as one of the worst with respect to access to funding. On the opposite side, we have investors that argue that many startups are not innovative or technologically oriented enough.

Corruption: This is a local embarrassment and a barrier of entry for enterprises. In a survey applied to entrepreneurs, 63% responded that they agree or completely agree that corruption is part of the business culture in Mexico. However, there is a correlation between the industry and its vulnerability to corruption, with the construction industry standing at the highest level, while technology stands at the lowest level due to its nature[13].

Mexico City’s startup ecosystem comprehends a net of actors that promote initiatives for the development of enterprises and create a working and a lively entrepreneurial network.

Here are some of the most important actors in Mexico City’s startup ecosystem:

– Universities: They play many roles in nurturing the local ecosystem, starting with graduating the talent that will give vitality and ideas to the country. As a matter of fact, the number of graduates from engineering is increasing; México is placed as the 6th country of bearing engineer graduates[14], a popular major, but not exclusive, of startup founders.

Further, one of the key contributions are their incubators, the most prestigious ones are from the universities ITESM and IPN. Educational institutions supply with groundwork by having departments or internal organization that foment the entrepreneurial culture, and by hosting events such as the Hult Prize or Get in the Ring. Finally, they deliver business groundwork from research departments; an example would be IPADE’s Research Center on Business Initiatives, CIIE.

– Incubators: Currently there are around 222 incubators spread around the country[15], one example is Fundación ProEmpleo that was founded by two Mexican business erudites, Alfredo Achar founder of Grupo COMEX, and Lorenzo Servitje founder of Grupo BIMBO, the world’s largest baker.

– Accelerators: They play an important role in boosting qualified startups with training, consulting, and in some instance, with help to get funds. Some of the main accelerators are Endeavor (@endeavor_global) for high impact entrepreneurs, MassChallenge, Venture Institute, Victoria 147 for female entrepreneurs, New Ventures and UPDCE from IPN.

– Government: INADEM is a government organism in charge of promoting entrepreneurial activity around the country. Other examples of government participation are the National Entrepreneurs Award, and the MUSEIC, which is the Mexico-USA council for the promotion of entrepreneurship and innovation. Additionally, the annually impart the National Entrepreneur Week, with hundreds of workshops, conferences, and thousands of participants.

– Innovation hubs and co-working spaces: such as Startup Mexico, The Pool, Impact Hub (@ImpactHubDF), and soon, We Work.

– Events: such as Startup Weekend by Techstars with its waited 54 hours weekend event; Startup Digest that publishes every week startup events and the like, Fundación E, ANDE, and Ashoka Mexico for social enterprises.

– MNCs: companies are also supporting our local startup development with programs, innovation centers, or even accelerators. BBVA Innovation Center organizes events and workshop about entrepreneurship and innovation. Also Telefónica, that opened the accelerator Wayra, which grants US$50 K to its graduates. Some other examples are EY and its program of Entrepreneurs of the Year, POSiBLE from Televisa, Google for Entrepreneurs, and the IBM Global Entrepreneur Program.

– Networking opportunities: There are copious opportunities to network in Mexico City starting with hubs and co-working spaces. Also, events are fun opportunities to meet people; you can find local events at Eventbrite, Meetup or by subscribing at Startup Digest. Some examples of main events are EmTech Mexico, Startup Weekend, National Entrepreneurs’ Week, Startup Grind Mexico City (@StartupGrind), Finnosummit, AMEXCAP’s Private Capital Summit, Get in the Ring and Silicon Valley Day.

Entrepreneurs to look up to in Mexico City

A common question at startup events in Mexico City is: “who is your favorite Mexican founder?” which is usually followed by silence. We still don’t have a ‘unicorn’ that gives us a unison answer, but we are getting closer. Nonetheless, there are important figures that have given vitality to the local startup ecosystem; some examples, which are currently founders are: Hernan Fernandez from Angel Ventures Mexico, Fernando Lelo de Larrea co-founder of Venture Institute and Venture Partners, Cesar Salazar before founder of VC Ventures, then of 500 Startups in Mexico City, and now a partner at 23 Design; Samuel González Guzman from Fundación E, and Marcus Dantus from Startup Mexico.

A culture of taking risks and to accepting failure as a learning tool still needs to be ingrained in Mexico City, along with industry openness, infrastructure improvements, and participation of the government to eradicate corruption. Mexico City startup ecosystem is growing but is still far from reaching its full potential, considering Mexico’s talent and markets’ size as well as major influencers of the ecosystem.

Brenda Gonzalez Riviello is the curator of Startup Digest Mexico City, a Techstarts organization, a business consultant, and has been invited to participate as mentor or judge for entrepreneurs such as the Hult Prize. She graduated from Economics and Political Science at the University of California, Irvine. She has work experience in several industries acting as a consultant, manager, and executive. Currently, she is committed to helping Mexico’s entrepreneurs to succeed, and position them at an international level.