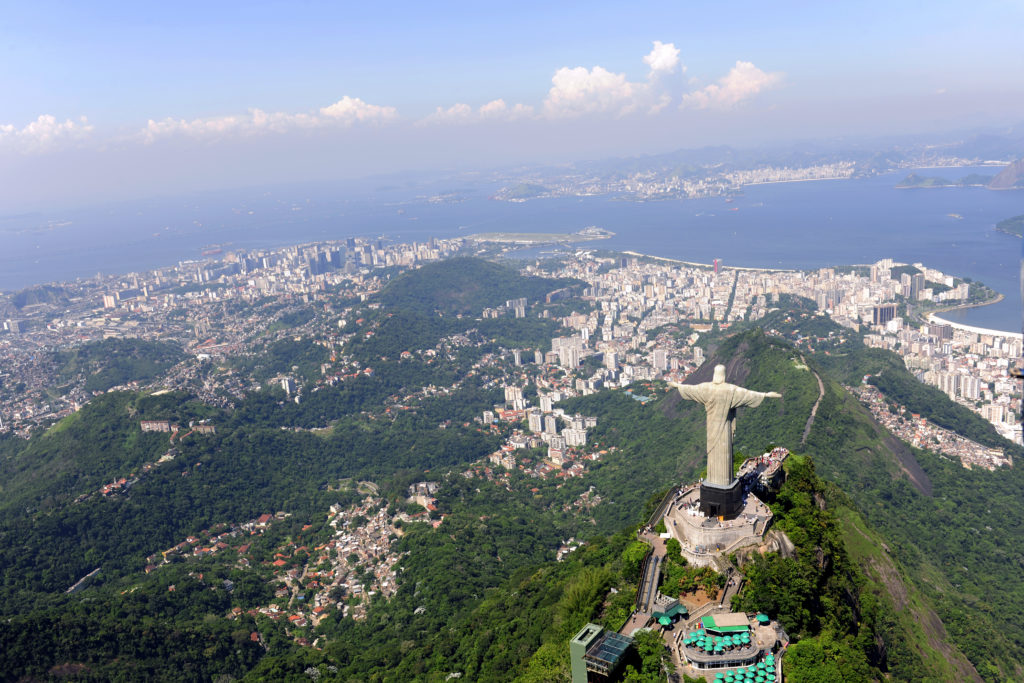 Rio de Janeiro, also known as Wonderful City, it’s a great city for those who enjoy outdoor activities. With several natural resources, including beaches, mountains and the largest urban forest in the world, the Tijuca Forest, attracts many people seeking the carioca lifestyle. The resort atmosphere and the proximity to São Paulo (Brazil’s financial center) is considered excellent for digital entrepreneurs and has attracted several startups, who want entrepreneurship and life quality, to establish their headquarters here.  In StartupBlink’s 2019 report, Rio de Janeiro ranked 2nd in Brazil and 64th globally.

Rio de Janeiro has 16.46 million inhabitants, the city was essentially a culture of public service and few entrepreneurial initiatives. After losing the capital status, the city has been trying to reinvent itself in recent years, mainly by being in the spotlight after being chosen host city of the 2016 Olympic Games.

Public and private sector investment has transformed the river into a modern city with the goal of being a reference in entrepreneurship and stop being just in the tourist area.

In the last six years, the young startup scene has matured enough in the city. One of the signs of this maturation was the launch in October 2015, the Cariocas startup community. Numerous coworking places and accelerators are in town. The State Government launched the Startup Rio incentive program, which in addition to investment in companies offers physical and mentoring structure.

Rio de Janeiro has 335 startups, according to the latest survey published by the Brazilian Association of Startups (@ABStarups) in late 2015.

Who is making history in the Rio scene? Which products or services developed, founders who attracted investment, or have been acquired by larger companies?

Peixe Urbano: (@PeixeUrbano) founded in 2010 by entrepreneurs Alex Tabor, Julio Vasconcelos, and Emerson Andrade, grew exponentially in a few months. It was acquired in October 2014 by Baidu when the company had 20 million users.

Descomplica: (@Descomplica) Launched in March 2011, the platform created by teacher Marco Fisbhen it is a prep course online. It has received more than $ 5 million investment from Brazilian and American investors.

WeDoLogos: (@yeswedologos) Launched in 2011, the design services sales marketplace by partners Gustavo Mota and Gustavo Zimmerman. Merged with the Logovia, its main Brazilian competitor, in May 2015. In early 2016, it surpassed the 10 million mark reais paid to registered designers.

ChefsClub: (@chefsclub) Launched in May 2012 by Fabrizio Serra, the ChefsClub, club that offers discounts in restaurants, it has more than 100,000 customers at its base, more than 1,200 stores and is present in 20 Brazilian cities. The startup received in March 2015, a contribution of $ 3 million of Brazilian fund Confrapar.

Sieve: (@sievetech) Founded in April 2010, by Felipe Salvini, a Sieve price intelligence platform was acquired by E-commerce group B2W in June 2015 for $ 130 million.

The biggest and most important players in Rio de Janeiro ecosystem

To create an incredible ecosystem, we need good and big players in the city. Here are some of the important accelerators, funds, coworking, and events:

A lawyer who worked in the cafeteria from adolescent family expanded the business for restaurants in the food industry. Over time, he entered the investment fund Gavea Angels and began acting in startups segment. He founded the Lab22 and MIA (investment fund formed only by women), today is a strong advocate of women’s entrepreneurship.

Today the only accelerator in operation in the city, Nave, was launched in 2014 and was created by the Estacio College. The goal is to accelerate early-stage startups, without turning into partner companies only offer working space. Just offering mentoring and open doors to possible partnerships between startups and university or other company. The only requirement of the institution is that at least one of the team of entrepreneurs is a student or former student of the college.

Created in 2013 by investors Camila Farani, Fernando Campos and Henrique Mendes, the incubator is not an open selection process. It acts as headquarters for companies that investors enter partner. To participate, you must receive an investment of the investors.

RioCriativo is an incubator of the state government of Rio de Janeiro for the company’s creative economy. The incubator provides cash investment and workspace without becoming a partner of the company.

Startup Rio’s startup acceleration program of the State Government. The government subsidizes the purchase of equipment and contracting of service providers, mentoring and workspace. All this is done without the government becoming a partner at a startup.

The background born in Belo Horizonte, and focused on investment in technology, has a branch in Rio and is very active in the city. Invested on Chefs Club, Izzui, Easyfood and several other.  They invest in typically Series A rounds.

Gávea Angels is an association of angel investors, which twice a year open selection of startups for investment. So many angels invest in the same startup, riding a kind of background and so the company can get a higher amount.

The investment fund created in Rio, was a great success story because after six months of founded, made IPO. He invested in several companies and recently did the output of MoIP that was sold to Wirecard.

The investment group that created the Ideiasnet, after a few years left the company and created a new fund called Ipanema Ventures. Ipanema Ventures invests its own money in projects at seed money and early stages, in rounds typically from R$ 400K to R$ 1M.

The IT development institution in Rio de Janeiro, the RioSoft association offers courses, lectures, meetings and support in startups internationalization. The RioSoft promotes once a year, RioInfo, the country’s largest IT event.

A meetup of startups that happens every two months, in a bar in the south of the city. With happy hour weather mixture relaxed and content, with lectures and mentoring sessions in the middle of beers and drinks.

Rio Info is the leading event dedicated to Information Technology (IT) held annually in the state of Rio de Janeiro and one of the largest in the country. Brings together entrepreneurs, academics and professionals seeking new market opportunities and conduct business. It is a space for presenting new ideas and exchange experiences.

Fuckup Nights is a global movement born in Mexico in 2012 to share publicly business failure stories. Hundreds of people attend each event to hear three to four entrepreneurs share their failures. Each speaker is given Beheerder 7 minutes and is able to use 10 images. After each speaker, there’s a question/answer session, as well as time for networking. In Rio, the event takes place in Copacabana, since 2014.

A recent survey by Movebla indicates that are 26 coworking spaces in the city. The most popular are:

The Coworking which is located in Botafogo neighborhood preferred by startups is directed by Amure Pinho, current president of the Association of Startups. It is the favorite of startups by hosting events and many foreign startups to visit space.

The accelerator, recently opened the space for people outside to enjoy the same environment that accelerated startups use the advantage for entrepreneurs can have access to the network accelerator. It is located in downtown Rio, beside the newly renovated port area of the city known as Praça Mauá, a very charming area of the city.

With units in Gávea and Botafogo, they offer more than one workspace, has courses, events, and a beautiful house with swimming pool and green areas to relax, this environment attracts many startups to space.

The area is best known in Barra da Tijuca and preferred by companies who choose to settle in the region, as it is located in a central area of the neighborhood. Located within shopping and has easy access.

The first coworking Copacabana, near the Siqueira Campos subway station, the cozy space gets Fuckup Nights every two months.

“Rio is for fun, São Paulo is for business!” This sentence was written at the entrance of major international event startups, hosted in São Paulo, in 2012. The image that people have of Rio is just caused by the feature that most attracts people in the city: the lifestyle. Therefore, there is a reputation that people who live here work less than in other cities of the country and therefore would not be a good place to do business.

This, coupled with the fact that for many years, governments in the 90s and early 2000s did not provide tax incentives. Thus, important market players have left the country’s former capital glamorous toward places where they were received with open arms.

This is the main reason why the city has a large delay compared to other metropolises in the world. They lacked not only incentives for companies, but investment in public transport, health, basic education, and conservation works for the city. Rio today has 40.9 kilometers of subway, and São Paulo has nearly double that. And New York, which in length, is smaller than the city of Rio de Janeiro, is 418 km long.

The change of command at City Hall and the choice to host the 2016 Olympic Games, brought several investments to the city. Many works, the construction of Line 4 of the Subway (still in progress), the opening of the Museum of Tomorrow (one of the references in design and innovation worldwide) and many companies are coming here, because of tax incentives. As we are still in the process of change, we have a big challenge ahead.

What are the key Startup events and how do you build effective networks in Rio de Janeiro?

For those who want to connect to people who are making it happen in Rio, has startups community called Cariocas. Also, to learn of the events that take place here, there is a Startup Digest, where all the best events related to startups and entrepreneurship are there.

There is still the most famous meetup city, Circuito Startup (@StartupCircuito), which takes place once every two months, always in a bar, in a mixture of happy and content. The event is a platform that connects all those who have participated in at least one edition.

The main event of technology and innovation of the city is Rio Info, an annual conference which takes place over three days and brings together major international national names. Inside the event happens a great pitch competition with startups representatives from all Brazilian states and several countries.

Monique Fernandes was born in Rio de Janeiro and still lives in the city. Six years ago she is directly involved in the local startup ecosystem. She organized the meetup Geeks On Beer for two years. Monique is entrepreneurial for five years and is in its second communication agency, Tagarela, specialized in digital entrepreneurship. Mentoring in several events and organized some Startup Weekend editions in the city. For being very active in the community of Rio, she was chosen to act as a facilitator of the event. In addition, she is part of the Council of RioSoft, an organization that foments the development of technology and innovation in Rio de Janeiro city.