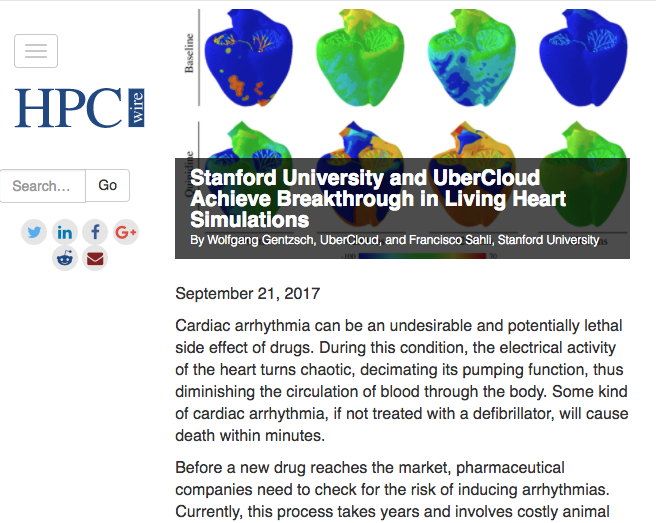 Do mechanical engineers need the cloud?

While most companies use cloud computing to facilitate better and smarter processes, mechanical engineers and scientists are stuck with outdated technology and hardware for accomplishing their tasks. This results in considerable unproductivity and downtime. Often, their systems don’t even talk to each other and they struggle to get things done. Although many mechanical engineering and scientific jobs do involve the use of cloud, there are several problems they face while trying to integrate their systems.

UberCloud helps mechanical engineers and scientists run jobs in parallel on the cloud, using their award-winning HPC application containers. These containers are portable toolboxes that contain everything an engineer needs to get productive on any data center. They partner with Microsoft Azure to bring cloud to engineers. And partnering with industry leaders like ANSYS, Siemens, Dassault Systemes, Numeca, etc. assists in getting a high quality user experience in the cloud.

Such a solution has been reciprocated well from the engineering and scientist community, and their client base has grown to 3500 with around 40+ marketplace offers. However, still UberCloud has to face challenges in making customers see that status quo in a dynamic world is a risky option. UberCloud lets engineers do interactive GUI-based analysis in the cloud and run browser-based environments. This helps in communicating the value of using their tools to their customers.

Mechanical engineers, industrial workers, scientists, physicians, etc. alike need the power of agile systems on the cloud to bring together all systems and make things faster, productive, scalable and efficient. By combining powerful simulation software with broadest cloud solutions, engineers benefit by running faster simulations, reducing reliance on overworked IT teams. Not just that, such systems encourage a culture of collaboration which helps all stakeholders work synergistically.

With an established need for such a product, UberCloud has a growing client base. They have won multiple awards for their technology including HPCWire Best Use of HPC in the Cloud thrice (2013, 2014, 2017), Gartner Cool Vendor in 2015 and Hyperion Innovation Excellence award in 2017. They are also part of some exciting research such as the Living Heart Project. Having already raised a pre-series A funding, they aim to make high performance computing a reality for every engineer. Launched in 2012, they’ve come a long way. UberCloud has also actively conducted more than 200 HPC experiments.

This article is part of StartupBlink’s City Partnership Program allowing projects to get a wide array of marketing related activities performed for them by StartupBlink.

Managing projects can be tricky, especially in the startup world.  Our day to day meetings, tasks, calls, emails, and shifting priorities can make it difficult to keep track of important objectives.  Thankfully, an innovative platform is tackling some of these problems.  Wrike provides online project management tools that enable teams to increase collaboration while simplifying […]
Written by StartupBlink December 19, 2017November 19, 2020

Click here to view the startup map on StartupBlink Market research is a crucial aspect of launching a startup. It helps you get rid of some of the uncertainties associated with startups. Of course, you can never be too sure about anything. But market research tools help you understand your customers and industry better.
Written by StartupBlink January 19, 2016March 29, 2021

Porque Digital: The Future is Now!

Covering a startup at its exact moment of inception is an exciting privilege.  It provides insight into the early beginnings of creativity, passion, and burgeoning business success. Porque Digital recently made its debut on the global digital media marketing stage in autumn 2017.  StartupBlink congratulates the Porque Digital team, and Founder, Aldo Castro, on their new […]
Written by StartupBlink January 25, 2018November 19, 2020

Click here to view the Global Startup Organizations Map Startup organisations address an important problem faced by entrepreneurs the world over, that of entrepreneurship being a lonely journey. Accelerators do fill in this gap to a certain extent, but what about startup founders struggling to figure out even their basic product, let alone monetisation strategy? […]
Written by StartupBlink October 26, 2015March 29, 2021

The Most Popular Online Startup Communities

Click here to view the Startup Ecosystem Community Introduction Founding a startup can be a lonely journey. Sure, you may have a team and your own small support group of family and friends, but what about the time when you puzzle over questions related to funding, growth, marketing and hiring?  Luckily, as in the case […]
Written by StartupBlink April 1, 2016March 29, 2021

Validate your Startup and Boost Credibility

Startup Validation After much hard work and deliberation, you’ve finally launched your startup. But how do you prove that you deserve the trust of clients, investors, team members, that are all crucial for your startup’s success?
Written by StartupBlink July 5, 2016March 5, 2021

myQuest coaching and training platform is an interactive software commonly used by enterprises and business owners. This platform enables business owners to engage their clients and employees in a digital environment. Most enterprises today have realized the importance of this platform in running their daily training and onboarding processes.
Written by StartupBlink September 6, 2018November 19, 2020
Next