The updated rankings reflect the third iteration of the Coronavirus Innovations map and includes a major increase in the scope of the project to reflect a wide variety of verticals affected by the pandemic, including health aspects as prevention, treatment and vaccines, in addition to economic impacted verticals such as supply chains and e-commerce relating to the “New Normal”.

The results of the updated ranking (Named Coronavirus Innovations Resilience Index) confirms our observations that under the Post Covid scenario, some countries are managing to unlock their full potential and produce innovation at faster paces, and rip the benefits of the new reality focusing on digitalization and technology. The full ranking tables can be found below the map.

This is the case of countries such as the US, Israel and Canada, with outperforming industries that have flourished during COVID, like Digital Economy, Smart Tourism, Diagnostics, Treatment among others.  The aforementioned countries ranked 1st, 2nd and 3rd respectively, are leading the global coronavirus innovation output.

Germany, Russia (led by the 3rd globally ranked city of Moscow) and Taiwan have also shown a solid momentum, increasing their rankings, as they focus on innovative approaches and policies supporting the local ecosystems.

Although the top twenty countries list is dominated by Europe and North America, some of the most promising coronavirus innovations are also emerging in Asia (Singapore, South Korea) and Australia, which appear in the second half of the top 20 rankings.

Also worth mentioning is Kenya, the highest placed African country in the Coronavirus rankings, showing its true potential in the face of a crisis. Two other local innovation leaders in Africa, Nigeria and South Africa, are showing excellent responses to the crisis on the continent. 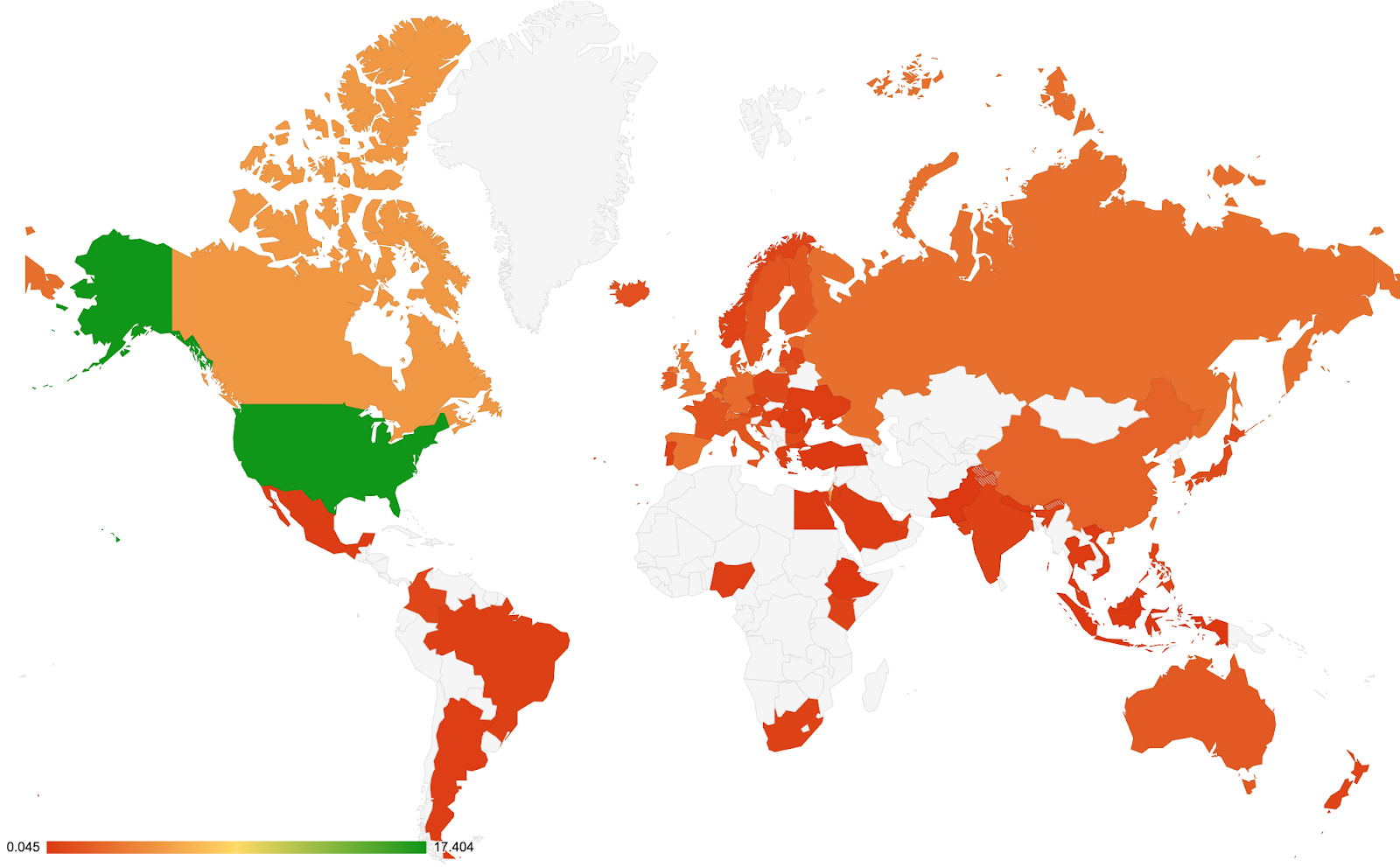 * Score based on metrics such as number of startups, number of coworking spaces, number of accelerators,  traction of the ecosystem’s top startups (Unicorns, Exits, and Pantheons) as well as economic indicators at the national level such as internet speed, internet freedom, R&D investment and Critical Mass

In the city rankings, San Francisco has taken the top spot on the list of most resilient cities in the Post Covid world, matching its position in our Global Ecosystem Report.

As for the results for the USA cities, the entrepreneurial hubs of San Francisco, New York and Boston are now full of thriving startups taking the lead on this new post covid era, on a variety of verticals such as Smart Tourism, On-demand services, Lifestyle, Ride-hailing, Online-food ordering and Telehealth Diagnostics. New York, known mostly for its Fintech startups, managed to take the second spot. The city’s response and adaptation to the effects of the Coronavirus crisis have been outstanding considering that it has been one of the worst-hit areas in the world; we believe this is exactly why they’re excelling. Boston, on the other hand, is historically known for having great health-related startups. This tendency shows, as it closely follows New York to take fourth in the rankings.

Seattle takes 14th place, higher than its global ranking, perhaps for the severity of the crisis in this highly innovative city. San Diego, known for its healthcare startups, is 11th, closely followed by the neighbouring Los Angeles featured at 8th.

In Canada, Toronto is featured in the sixth spot, in line with what we see in the general rankings, revealing the true potential of this Canadian city. 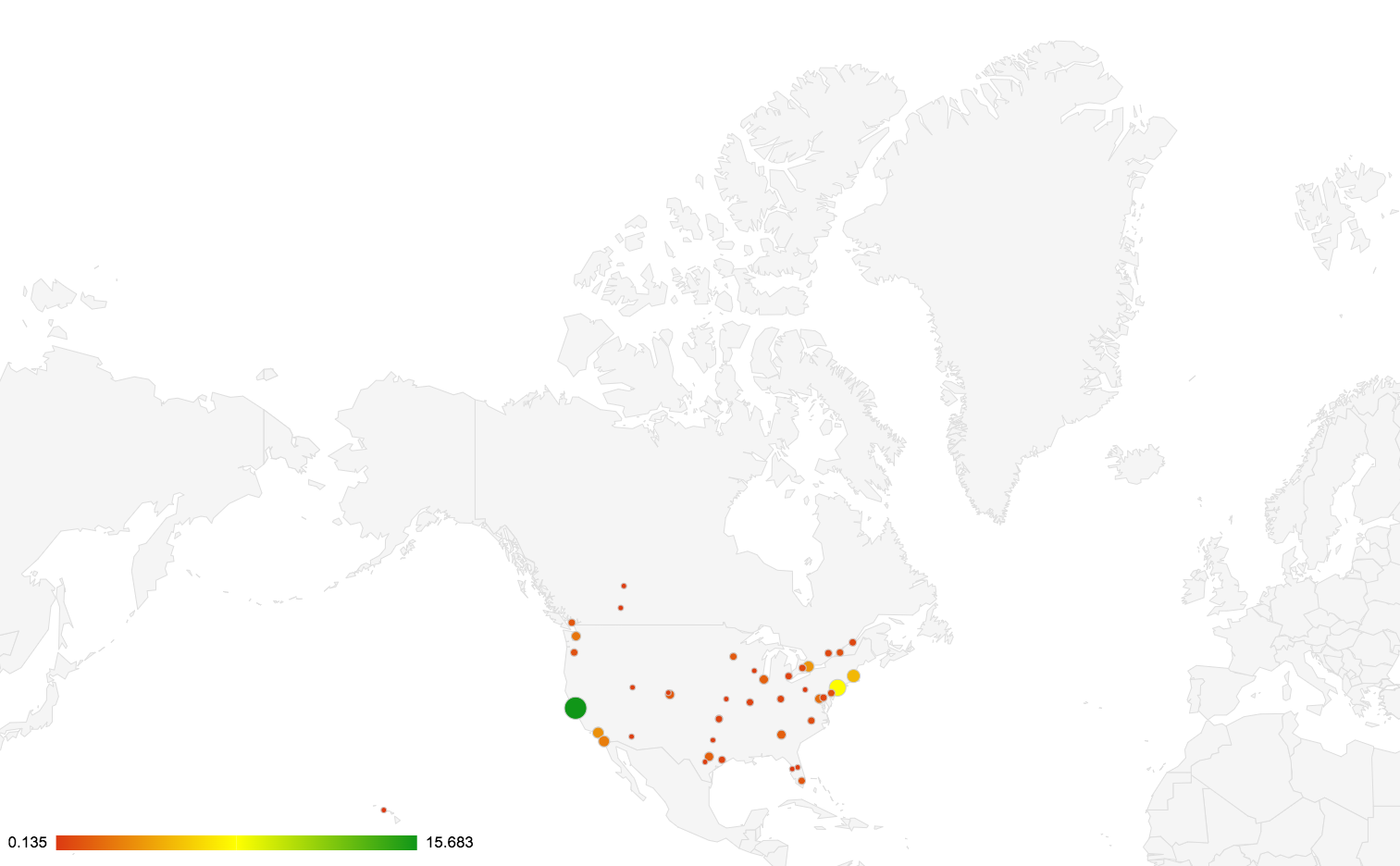 In Europe, Moscow has achieved an impressive ranking at 3rd globally and is still the highest-ranked city in Europe. This is mainly due to specific innovations that have had a global impact, such as the Sputnik V vaccine.

Moscow is followed by London, Toronto and Tel Aviv, strong hubs of global innovation, which have also stepped in to create high-quality COVID-19 innovation.

Across Europe, it is also worth noting that both Spanish entrepreneurial hubs of Barcelona and Madrid have made a sound improvement in their rankings since the last Coronavirus rankings, placed now at 10th and 18th respectively, an important milestone for Madrid – the first time the city makes it to the top 20. 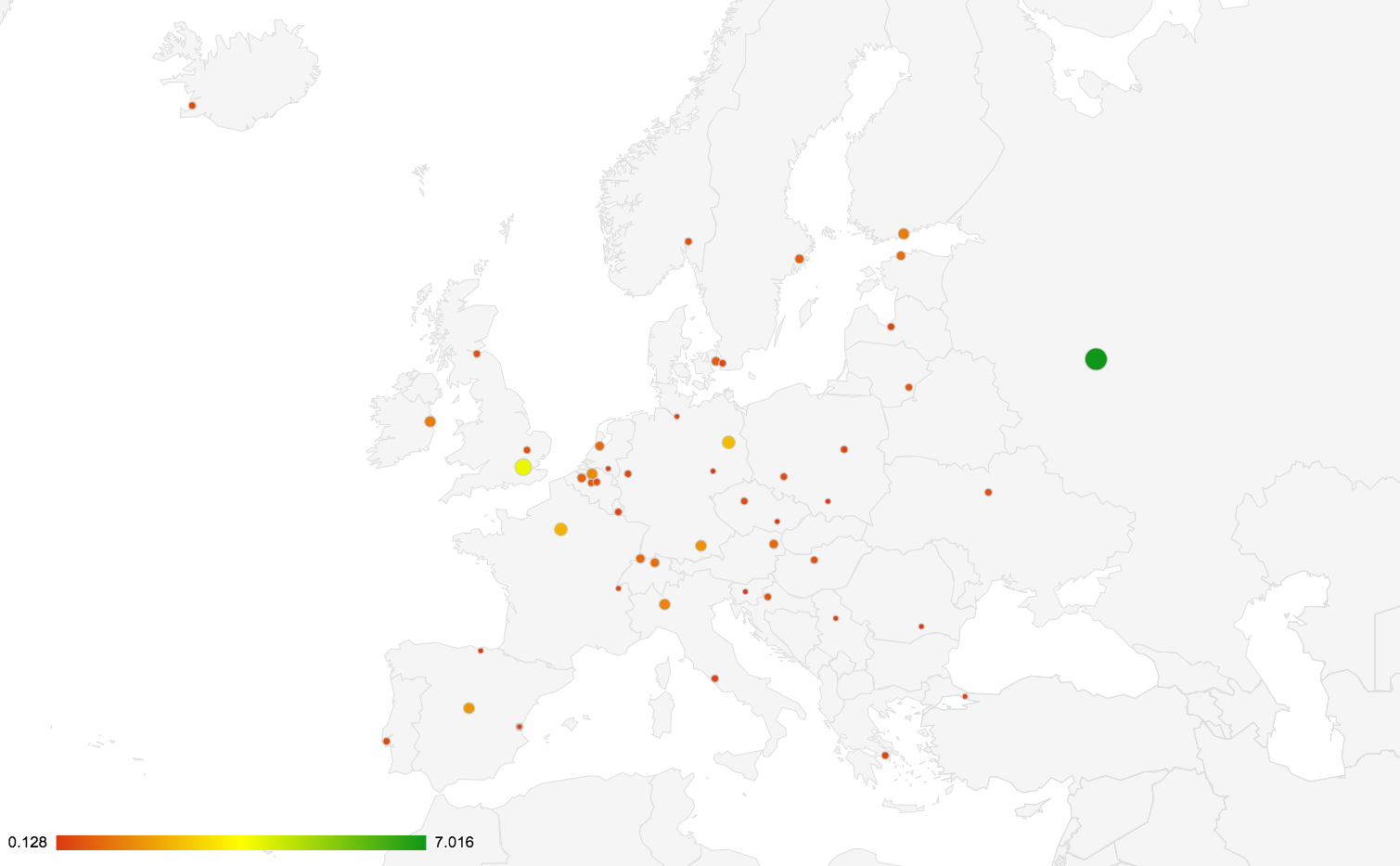 Also in the Top 10 we have the Asian cities of Taipei City and Seoul, which is an example of how well these two locations are doing in dealing with this crisis. Taiwan is leading in public policy measures to effectively deal with the pandemic, and their innovators are also overperforming in this crisis.

On the other hand, the government of South Korea is investing heavily in startups, as well as creating regulatory sandboxes that decrease the legal risk for entrepreneurs. South Korean startups benefit from some of the most forward-thinking and comprehensive government support in the world.

We would like to thank our partners from the HIEX by the UNAIDS for their support in building the map and researching locations that have been successful in fighting Coronavirus with innovation, and we are glad to continue analyzing with them how the world’s startup ecosystems are adapting to a forever changed world. 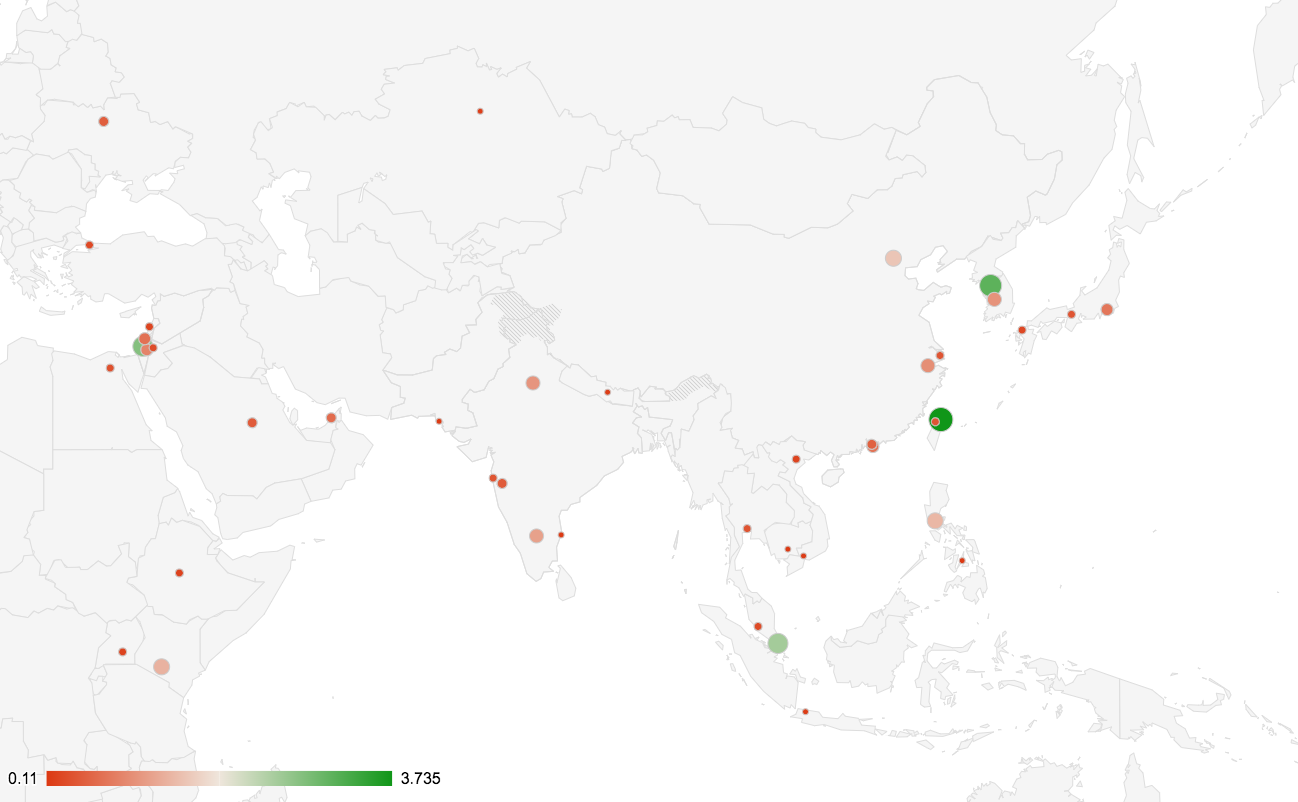 Rankings of Cities per Region

Latin America and the Caribbean

Africa and the Middle East

The Importance of Startup Ecosystem Research

Awareness of startup ecosystems is crucial not just for startups, investors and entrepreneurial community but also governments and large corporations. Understanding startup ecosystems benefits decision makers and puts them in a position so that can grow their ecosystems. A thriving startup ecosystem boosts the economy, creates a talent pool and generates jobs locally.
Written by StartupBlink August 22, 2018November 19, 2020

StartupBlink has launched the Startup Ecosystem Ranking Report 2019 that now ranks 1,000 cities and 100 countries worldwide and is available for download here. Barcelona is Southern Europe’s most dynamic startup ecosystem, being home to over 1,300 startups that mostly develop their activity in the fields of Industry 4.0 (17%), life sciences (13%) and mobile & […]
Written by StartupBlink May 7, 2019November 19, 2020

What is StartupBlink? (Check out Here) We created a global map of the startup ecosystem, including Startups, coworking places, mentors, freelancers, accelerators, and much more for you to explore.
Written by StartupBlink September 7, 2016March 11, 2021

StartupBlink’s 2017 global report ranked over 900 cities based on the health of their startup ecosystems.  The scale of the report is unprecedented and it remains the largest study of startup ecosystems available online.  Our team dedicated countless hours – and thousands of cups of coffee – to build a map worth sharing with the […]
Written by StartupBlink February 21, 2018November 19, 2020

Download our report here. 2019 Rank: 1002017 Rank: 100 Startup map of Ethiopia: Here Our top 100 country rankings close with Ethiopia. Maintaining the status quo and remaining in the same position as our last ranking, Ethiopia needs to do more to rise up the rankings. The country faces the same issues as other African […]
Written by StartupBlink April 29, 2019March 5, 2021

StartupBlink has launched the Startup Ecosystem Ranking Report 2019 that now ranks 1,000 cities and 100 countries worldwide and is available for download here. Kyiv is the capital of Ukraine and Ukraine’s startup capital. Around 60% of the tech ecosystem of Ukraine is based at Kyiv. It’s a home for more than 500 startups and more […]
Written by StartupBlink May 8, 2019November 19, 2020

StartupBlink has launched the Startup Ecosystem Ranking Report 2019 that now ranks 1,000 cities and 100 countries worldwide and is available for download here. Queensland, the second-largest and third-most populous state in Australia, has seen a huge surge of startup activity over the past 5 years. This was not an accident, rather a well-orchestrated effort with […]
Written by StartupBlink May 8, 2019March 12, 2021
Next

People reacted to this story.