Following the success of its Kickstarter campaign, Onion continues to sell Oboo to the consumer technology market by now partnering with IndieGoGo

The Oboo Smart Clock takes advantage of Onion’s powerful Omega2S IoT Module as its core computing element. With integrated Wi-Fi, the Omega2S enables the smart clock to be always connected, resulting in automatically adjusted time, up to date information like local temperature and weather reports, music to wake up to, and connection to other devices, such as your smart phone and digital assistants like Amazon Alexa.

The Oboo is now being offered for sale through the IndieGoGo InDemand program. The Smart Clock was initially introduced in November of 2017 through a successful 30 day Kickstarter campaign. This enabled Onion to raise the necessary funds, gain initial market acceptance, and receive valuable feedback from over 2000 backers. Since November, Onion engineers have been busy designing, prototyping, testing, and preparing the Oboo for volume production.

The creation of the Oboo has been executed on an impressive development schedule. “It’s a testament to a talented design team and the easy to use Omega2 Linux-WiFi module” stated Zheng Han, CEO and co-founder of Onion Corporation. “We focused our energy on where we could innovate and add value, while leveraging other existing technologies without reinventing the wheel,” Han said. “This lead us to complete the product development in nearly 3 months with a small engineering staff.”

The development timeline was impressive indeed. Here’s a look at the overall schedule:

The Oboo comes with a host of advanced features that makes it unique in the product world today. 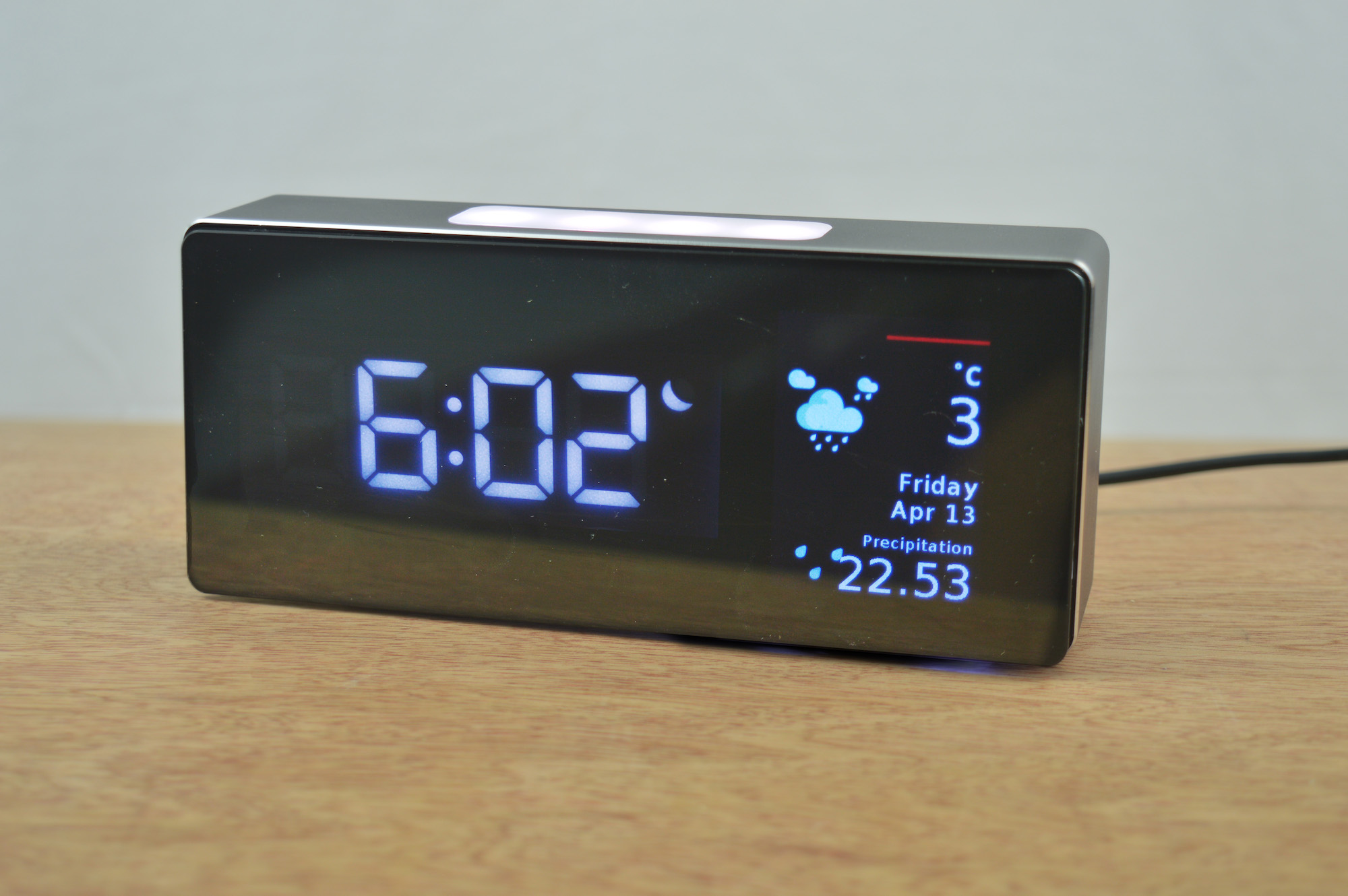 The Oboo Smart Clock represents a great product example of the Internet of Things (IoT). As more and more of our everyday lives becomes connected, IoT is becoming mainstream, and more and more companies are being driven to incorporate advanced technology features into traditional functions. That’s exactly what the Onion team did, by starting with the original concept of a bedside alarm clock, and adding technology to make it more useful, accurate, and relevant to today’s society.

For the hardware, the team chose the Omega2S as the core processing module. With integrated memory, storage, and WiFi, the Omega2S would handle the base functions, while offloading a number of peripheral functions to a coprocessor and a Bluetooth module. Onion’s hardware engineers leveraged their experiences from the design of over a dozen expansion and development boards to create and build all of the printed circuit boards that go into the Oboo.

The software effort was the largest and most critical for the Oboo development. With the concept of the software “cards” to display internet data like weather and traffic, plus functions like the need to synchronize with the internet standard for time of day, the writing and testing of the all of the necessary code was a major portion of the overall project effort. The Onion software team used a combination of Javascript and C code for the bulk of the overall software architecture used to make Oboo a feature-rich reality.

The mechanical design is one area where the Onion team decided to utilize expertise outside of the company. Both external appearance and high quality audio performance were very important to the product goals of the Oboo, and so Onion decided to leverage industry experts to get a sleek, state of the art look and feel and sound amplification and reverberation that it knew would impress and delight its customers.

And for the Connectivity portion of the product development, this was another area that was a natural for the Onion team. With vast experience from having integrated Wi-Fi in all of Onion’s products, the Oboo requirements for the technologies needed to connect to internet streaming music, data services, and smart phone interaction for network setup was easily implemented with the power of the embedded Omega2S processing module.

The Oboo Smart Clock is currently shipping in initial quantities to backers from the Kickstarter campaign. For the new IndieGoGo promotion, advanced orders are being accepted now for delivery starting in September 2018. 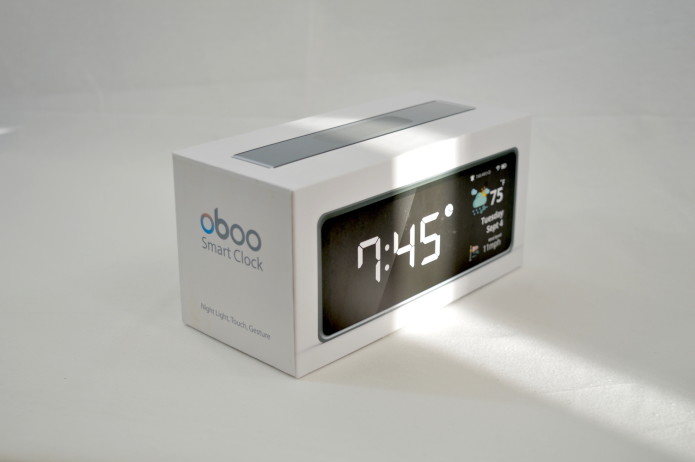 Onion Corporation is an innovator in IoT products and technology, and has a charter to inspire the invention of IoT products to everyone: makers, students, and commercial product developers. With its tiny, affordable, and modular Omega2 platform, Onion has made IoT development quick, easy, and fun. Now with the introduction of the Oboo Smart Clock, Onion is poised to bring new consumer electronic products to market quickly and with advanced technical features and affordable price points.

The IndieGogo website for the Oboo Smart Clock can be found at https://www.indiegogo.com/projects/oboo-the-1st-gesture-controlled-smart-alarm-clock-design#/

Addition information about Onion Corporation and the Omega IoT computer, can be found at https://onion.io

As every month, Startupblink selected the most innovative Hardware and IoT startups that shared their projects with us recently. November’s Hardware and IoT startups are working in the fields of real-time voice telecommunications and embedded systems. StartupBlink Member since September 4, 2014 Loading + Follow Following
Written by StartupBlink October 31, 2018November 19, 2020

Editor’s note: As part of our ongoing series for hardware startups in partnership with ANSYS Startup Program, today we’re covering crowdfunding campaigns. Read on to find out how you can make yours uber-successful… If you’re running a hardware startup, chances are you’ve thought of crowdfunding. And why not? Crowdfunding helps you answer a few important […]
Written by StartupBlink August 8, 2017November 19, 2020

How Engineering Simulation Can Help Your Drone Startup

Drones, or Unmanned Aerial Vehicles (UAVs), have traditionally been used for military operations. Today, drones have become mainstream, thanks to many e-commerce companies using them for deliveries and similar services. Drones are now essential to industries like security, transportation, e-commerce, surveillance, and emergency aid. They are also being used by individuals for recreational activities. While […]
Written by StartupBlink March 5, 2018November 19, 2020

EP-8: Chat with Claudiu Leverenz from Munevo Drive that enables hands-free control of the wheelchair

The auto industry is constantly changing, and engineers are grappling with many new challenges. What’s more, this is one industry that has had a far-reaching impact on the world over the years. There’s a lot of discussion revolving around self-driven cars, energy consumption, and designing vehicles with the latest software. In this day and age, […]
Written by StartupBlink March 20, 2018November 19, 2020

Best Cities in the World for Hardware Product Manufacturing

It’s one thing to have an idea for a hardware product, and completely another to manufacture it at scale. There are a number of logistical issues to be taken into consideration before you go about manufacturing your hardware product. One of the most important considerations would be, where should you manufacture your product? This is […]
Written by StartupBlink August 15, 2018November 19, 2020

Everyone loves a success story, but failures tend to be shoved under the carpet. However, we can learn much more from failure than from success. In this way, failure is a stepping stone to success. In the hardware startup world, there have been many failures, and we can learn from the mistakes these startups have […]
Written by StartupBlink May 3, 2018November 19, 2020
Next