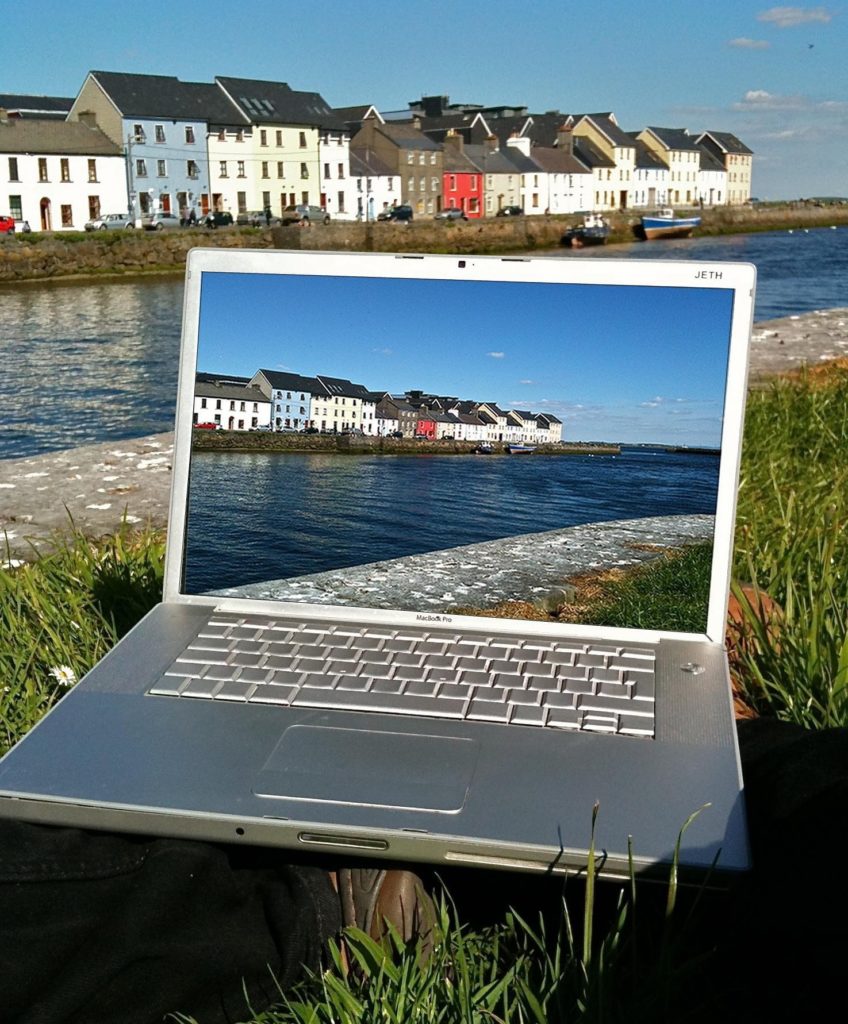 To set the scene for Galway’s vibrant startup ecosystem, one needs to appreciate Galway’s geographic, cultural and business landscape. Galway is located in the West of Ireland, approximately a two-hour drive (200 km) from the capital, Dublin. The population in the greater Galway hinterland exceeds 250,000 people, making it the island of Ireland’s fourth largest center of the population after Dublin, Belfast, and Cork. For many Irish and international visitors, Galway is synonymous with the Galway Horse Races.  In StartupBlink’s 2019 report, Galway is ranked 3rd in Ireland and 227th globally.  For over 100 years, the Galway Races has gone from strength to strength with now in excess of 150,000 people attending the week-long festival every July. Recognised as the greatest midsummer festival in Ireland, the ‘Races’ is known for attracting people from all walks of life with a broad appeal beyond traditional race goers. Complemented by other cultural experiences such as the Galway International Arts Festival, it is indicative of the standards of excellence that Galway strives for – recognised recently with the city’s designation as the European Capital of Culture 2020.

Galway was named as the top microcity in Europe in 2014/2015 by the Financial Times fDi magazine (for cities less than 100,000 people). We are also the world’s friendliest city according to Travel & Leisure Magazine. 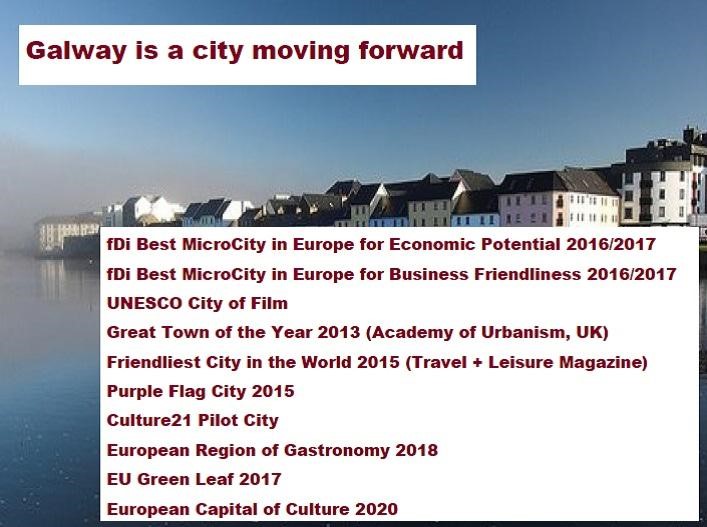 Foreign Direct Investment (FDI) has played a significant role in the development of Galway’s business landscape. Since the 1960s, companies in sectors such as medtech and life sciences, ICT, food and engineering to include: Boston Scientific, Medtronic, Fidelity Investments, SAP, Cisco, Avaya, Aviva, Hewlett Packard Enterprise, Valeo Vision Systems and many more have operated successfully in Galway. The importance of this multinational base was that is laid the foundation for the development of a vibrant indigenous sub-supply and logistics sector.

Galway is Ireland’s medtech capital, with a third of Ireland’s medtech workforce in one of Europe’s if not the world’s top medtech hubs, with a density of companies and medtech research institutes only rivaled by Minnesota. Just take a look at the Galway Tech Map and Galway Medtech Map and you’ll get a good overview of the companies based here.

Over the last decade, Ireland has attracted a new wave of global brands such as Facebook, Apple, and Google to base key European operations here. Galway has also benefited from this trend. 100 jobs were recently announced by Australian hotel cloud giant SiteMinder. Like Dublin and Cork, this has boosted the startup ecosystem as personnel emerge with key skills gained at these multinationals.

Some of Galway’s award-winning businesses include:

Strengths of the Galway Startup Ecosystem

A total of 19,472 new companies were formed in 2015 in Ireland according to the Vision.net Business Barometer. Ireland is a good place to start and run a business. Galway was the third most popular startup county with 803 companies registered during the year.

First and foremost, Galway is a great place to live for families young and old. It is a happening place with a wonderful social, tourism, community, multicultural and commercial vibe. Part of the magic is that Galway is a university city with two third-level institutions having strong academic and research and development traditions. There are 26,000 third-level students in the city, and 45% of the adult population have third-level education.

In terms of the city’s startup roadmap, 2014 saw the emergence of Startup Galway which serves as an umbrella network for all things startup-related in Galway. It is both a networking organization and an agent for change. In 2015 and 2016, several new startup coworking and incubation facilities opened in the city center (SuperPixel Labs, Startlab, WorkBench, and the PorterShed), with the emerging tech spaces in the Eyre Square area being dubbed “Silicon Square”.

A new angel syndicate was announced early in 2016 with the €2m worth of capital set aside that year for startups on the western seaboard. HBAN’s ‘West by North West’ fund (WxNW) was set up to invest in sectors including tech, manufacturing, education, and tourism. A similar medtech angel syndicate is also facilitated by HBAN. WDC has an investment fund to support enterprises in the West (from Clare up to Donegal), and WestBIC has been providing advice and services for entrepreneurs planning or starting a new business in the West for nearly 20 years now.

A digital-focused accelerator programme will be launched in Galway in early 2017 based in the PorterShed. This is part of the vision for the Galway City Innovation District. The Yield Lab from St. Louis also announced their intent to run an agtech accelerator in Galway.

“Galway may be considered small in relation to other MedTech cities, however, it has a big heart. The connections which exist across and between industry and academia and the willingness of talented individuals to lend a helping hand makes it an ideal location for a start-up. DiaNia Technologies is an innovative materials science company focused on the development of advanced technologies to enhance the performance and functionality of medical devices.  Our minimum viable product has the potential to reduce friction on the inside and outside surface of many catheter-based medical devices whilst increasing patient safety.  For us, the ability to tap into the wealth of global MedTech business knowledge and experience available in Galway helped mould our strategic direction.  Selection of DiaNia Technologies by the European Commission for a Phase 1 Horizon 2020 award demonstrated that our technology has the ability to meet a huge market need within the medical device industry.  The recent investment in DiaNia Technologies by experienced MedTech professionals and Enterprise Ireland will enable us to commercialise a global solution to an unmet market need through the application of materials science.”

Weaknesses of the Galway Startup Ecosystem

Galway can be viewed as a microcosm of Ireland’s economy both historically and projecting into the future. Ireland is a small market on the global stage. This context must be fully embraced in the development of enterprise and startup policy. To develop the startup ecosystem in Galway requires challenges to be addressed at both the national and regional level and at both large enterprise and startup level. It also requires Galway to part its full part within “Ireland Inc.”.

Enterprise Ireland has a vision for Irish enterprise to be a powerhouse of economic growth and job creation in Ireland. Galway buys into this vision. Five issues which Ireland Inc. needs to continually revisit are:

Significant work has been undertaken by various bodies to identify how Galway’s startup ecosystem can grow and succeed. For further reading, consult:

Startup promoters and teams have access to several innovation, incubation and coworking spaces in the Greater Galway area.

Other centers located outside Galway include The Hub in Headford, and The Burren Enterprise Centre in Kinvara which both provide affordable professional office space.

There are two excellent pre-accelerator startup programmes to assist entrepreneurial teams to bring their business from concept to funding ready status.

Traditional and online media in Galway and in Ireland generally are very positive towards startups. This means that the profile and regard for startup entrepreneurs have never been higher – as reflected in results from Ireland’s Global Entrepreneurship Monitor (GEM). This is facilitated and supported by proactive and progressive personnel working within our State Enterprise Agencies led by Enterprise Ireland and the Local Enterprise Office Galway – offering national supports delivered locally.

A weekly column about startup activity in Galway was published in the Galway Advertiser from 2015 to 2016, written by Bank of Ireland Startlab’s Tracy Keogh.

Technology Voice publishes stories about technology developments and events in Galway (and Ireland), on an irregular basis.

Finally, the NoiseyGenXYZ ezine and podcast promotes awareness of how extraordinary people with extraordinary ideas from generations X, Y and Z are impacting on and shaping the future entrepreneurial landscape in Galway.

The AtlanTec Festival, organised annually by the Information Technology Association of Galway (ITAG), brings in world-class speakers and practitioners and connects them with the most exciting innovative companies in the West of Ireland. The goal of AtlanTec is to unite and empower the different technology communities by facilitating the spread of information within the tech sectors in the West of Ireland.

Innovating West is another annual conference which brings together changemakers and innovators in the West of Ireland. Set up in 2015, it initially focused on highlighting key innovators who have established successful businesses along the west coast of Ireland, giving local entrepreneurs and businesspeople the chance to learn from them and their successes. In 2016, it expanded its remit, bringing in international entrepreneurs, investors and other guest speakers from Europe and the US. A sister event, Venture West, brought all of Ireland’s VCs together for a public conference and meeting in Galway in late 2015.

MeetWest, held each year towards November, is the largest business networking event in the West of Ireland and brings all of the business sectors together to connect and collaborate. The event includes a conference and networking dinner but also facilitates matchmade one-on-one meetings as well as ad-hoc opportunities to network and do business.

SCCUL Awards & Showcase: An entrepreneurial locally based financial institution – St Columba’s Credit Union Ltd (SCCUL) – has for the past 6 years created Galway’s largest entrepreneur competition called the SCCUL Awards. In 2015, 160 early stage businesses entered the awards which have a prize fund of €50,000. The awards event has expanded in recent years with all entrants and local entrepreneur ecosystem participants exhibiting in a Business Expo at the local University campus.

The PorterShed has become a nexus for startup events in Galway. Between its opening in May 2016 and the time or writing, 30 events had been held in the PorterShed, attracting about 2,000 people into space. For example, Startup Galway held three fireside chats with investors (from Hyde Park Angels, Founders Fund and Qualcomm Ventures) during the summer/autumn of 2016.

The good news is that there are plenty of online resources available with further information for a deeper look at Galway’s events, networks, accelerators, and change agents. The starting reference is the Galway Startup Guide – here is an excerpt:

From A to Z (well, from B to Y actually), this guide lists all kinds of startup resources including:

For each resource, the following is provided: a short description, key contacts, their webpage, and Twitter handles where available. Galway has many small tech tribes, but they’re all part of a big Galway startup community!

While Galway may be viewed by many as a small ecosystem, it can contribute in a big way to Ireland’s startup ecosystem as a whole, given the right technology, communication, and infrastructure.

Donncha Hughes is a startup mentor and business trainer. He co-curates Galway’s Startup Digest the news and events calendar for startups. He is also a member of the Advisory Board of Bizmentors.ie, a pro bono business network in Galway managed by SCCUL Enterprises which recently announced plans to expand its service to Roscommon and Mayo.

John Breslin is a senior lecturer at NUI Galway, where he is the director of the TechInnovate entrepreneurship fellowship and lead researcher at the Insight Centre for Data Analytics. He is the co-founder of boards.ie, adverts.ie, Startup Galway, and the Galway City Innovation District / PorterShed.