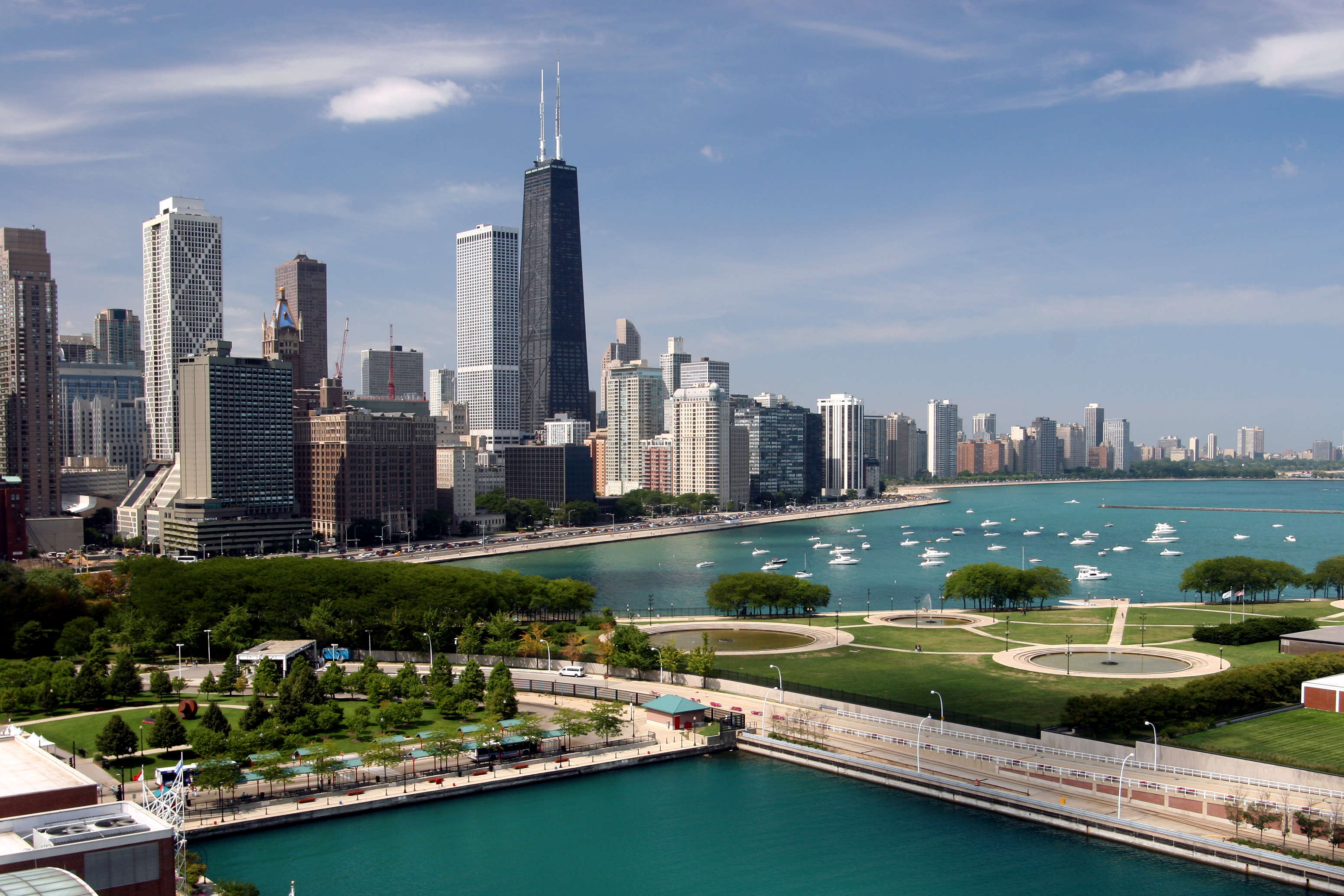 The city of Chicago, set on the southwestern shore of Lake Michigan, is a multicultural city which is recognized across the United States as a passionate sports town.  Its beautiful location and extensive parklands are a temptation to an estimated 86 million annual visitors.  With over 2.7 million residents, it is the third most populous city in the United States. In StartupBlink’s 2019 report, Chicago ranked 5th in the United States and 8th globally.

Dubbed the “Windy City” for its record-high winds, this bustling metropolis also boasts of the busiest airport in the world when measured by aircraft traffic, and is an international center for commerce, finance, industry, telecommunications, transportation and technology.

Although full of promise from the many great startups that have been made successful in recent years, there is still much improvement to be seen.  That being said, the improvement that has been made already is worth noting.  Chicago is a city with a deep sense of community and a knack for reinvention.  Innovators enjoy this lovely spot with an open community to implement ideas.

Raise (@RaiseMarket):  The idea was created by George Bousis in 2011, and with the help of partner Bradley Wasz the company was launched in 2013. Raise helps buyers increase their purchase power while helping sellers raise their earning potential.  They’ve raised over $78 million in funding.

WyzAnt (@wyzant):  Founded in 2005, this company connects students and parents with expert tutors across hundreds of subjects, both in-person and online.

Sprout Social (@SproutSocial): Made alive in 2010, this company helps to enhance and streamline conversations between businesses and customers.  It now has over 16,000 customers and has raised $42 million in funding.

Threadless (@threadless): Since opening its doors in 2000, Threadless has given the creative minds of the world more opportunities to make and sell great art.  Last year their artists made $1.5 million.

Trunk Club (@TrunkClub):  Started in late 2009 and growing ever since this startup is backed by top tier VCs and angels.  It was acquired by Nordstrom in 2014 for $350 million.

Advantages for startups in Chicago

Abundance of tech talent: With the presence of the University of Illinois in the city, it produces a good number of engineers and computer scientists every year.

Availability of funds: Apart from a number of VC funds in Chicago, new ways of funding are gaining momentum in the city such as crowdfunding and angel investing.

Different industries: There are various industries such as healthcare, transportation, I.T. and education thriving in Chicago. This makes it easier for a variety of startups to launch in the city and gain exposure to giants in their industry.

Disadvantages for startups in Chicago

Cost of living: While the city may be cheaper to live in than say Silicon Valley, it is still expensive for a startup to manage in.

Brain drain: Chicago offers startups a number of exciting opportunities, however as they say, the grass is always greener on the other side, and many startups eventually move to bigger startup cities such as New York, San Francisco, Boston and Los Angeles.

Who are the big players here in Chicago?  Here are some of the investors, accelerators, and coworking space providers.

Financial Solutions Lab (@cfsinnovation) – A five-year initiative managed by CFSI with JPMorgan Chase.  They are a community of startups, financial services companies and nonprofits.

Cleantech Open Midwest (@MWCleantechOpen): Boasting to be the world’s largest accelerator for cleantech startups, this company seeks to fund entrepreneurs who intend to battle our planet’s most urgent energy, environmental and economic issues.

Assemble Shared Office West Loop (@assembleoffice) – Located in the heart of Chicago’s West Loop, this office space was designed to foster creativity and productivity.  Its prime location provides easy access to the rest of the city, being only two blocks from the CTA blue line.

Level Office (@leveloffice) – After being dissatisfied in his search for rentable office space in Chicago’s Loop, Bill Bennett founded Level Office, a place where entrepreneurs could work together in a shared space.  They provide private offices, office suites, coworking, and virtual offices.

NextSpace River North (@nextspacern) – Located in the heart of Chicago’s downtown gallery district. Situated simply below the “Chicago” CTA stop, and half a block from the #66 bus route. The members come from a selection of industries: legal, software system, design, marketing, architecture, and engineering, etc’.

Where can you meet other local entrepreneurs to discuss ideas and share experience?

Chicago Lean Startup Circle (@chicagolean) – A group of high-tech entrepreneurs who help each other find the path to success.

Startup Founder 101 (@founding) – Meetup that early-stage startup founders meet once a month to hear successful Chicago entrepreneurs. Learn the best practices, strategies, and mistakes to avoid from those who are already experienced with the startups lifestyle.

The City of Chicago (@chicagocto) – Chicago is transforming into the innovation and technology center of the Middle West. Chicago’s Digital Hub provides many resources like Civic Data Apps, city API’s, a Data Portal and a lot more.

The Chicago startup ecosystem boasts of innovators, and investors are not hard to come by.  However, some entrepreneurs say there isn’t enough money, while investors counter there aren’t enough promising ideas to get behind.  Still, Chicago is a place that fosters creativity and has a thriving (and growing) tech community that pushes new and existing startups to success.

Sales Recruiters Chicago is offering startup sales recruiting services to the top companies in Chicago. Read more about the hiring salespeople for the startup process on our website.

What is StartupBlink? (Check out Here) We created a global map of the startup ecosystem, including Startups, coworking places, mentors, freelancers, accelerators, and much more for you to explore. StartupBlink Member since September 4, 2014 Loading + Follow Following
Written by StartupBlink September 7, 2016March 11, 2021

Click here to view Milan’s Startup Map Introduction to Milan’s startup ecosystem Milan is the heart of the startup scene in Italy. The city is the center of the Italian economy: many companies and multinationals have branches here, the Stock Exchange is here, main Italian media are here, investors are here. Historically, Milan is the […]
Written by StartupBlink November 1, 2016March 5, 2021

With a population of over 220,883 people, Ashdod is the sixth-largest city and largest port of Israel. The Ashdod, Israel startup ecosystem accounts for 60% of all imported goods and is one of the most important industrial areas of the region and the country. Situated at only 32km North of Tel Aviv, Ashdod is emerging […]
Written by StartupBlink April 7, 2021May 26, 2021

The Asian startup ecosystem is by far the largest and most populated in the world, with a fast-growing economy and the highest continental GDP.  The ethos of the Asian startup ecosystem is influenced by its vast geographical area that spans more than 45 countries, and a steadily increasing middle class. This is especially evident in […]
Written by StartupBlink November 10, 2020March 5, 2021

This article will explore the strengths and limitations of the startup ecosystem in the USA and Canada. As the dominating forces..
Written by StartupBlink December 7, 2020March 24, 2021

Cali is one of the most prominent and innovative cities in Colombia that has been working hard to promote its budding startup ecosystem through government support and investment. The city has a population of around 2,500,000 people and is culturally and ethnically diverse. With a rank of 330, the city of Cali is being featured […]
Written by StartupBlink February 12, 2021May 20, 2021
Next