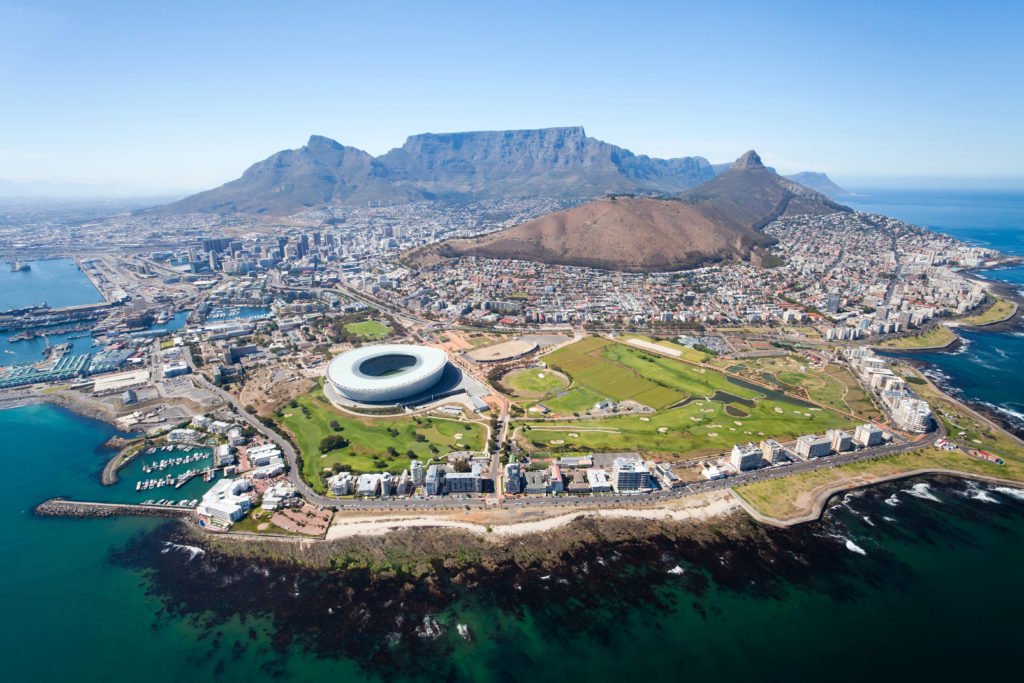 You know Cape Town as a tourist destination. An urban city with great food, multicultural population, and a well-developed infrastructure. But Cape Town is also a city with a flourishing startup ecosystem that has been in the making for many years.  In StartupBlink’s 2019 report, Cape Town ranked 1st in South Africa and 157th globally.

Avril Harvey, Manager at Impact Amplifier, outlines how the ecosystem in Cape Town developed over the years, “Like most things in South Africa, although innovation was part of the ecosystem for a long time, the real impetus has been felt in the startup ecosystem since 1994. A big factor in developing start-ups in Cape Town, especially tech start-ups, has been the success achieved by entrepreneurs such as Mark Shuttleworth, and Hannes van Rensburg of Fundamo, as well as the launch of platforms such as Mxit, Triggerfish Animation Studios, and BSG. Cape Town is strongly associated with Silicon Valley in terms of having a similar culture, an iconic landscape, large talent pool, determined political will as well as being centered around 4 strong academic institutions.”

Most startups in Cape Town are tech-enabled and solving problems unique to the African continent. Take for example Nomanini, a startup that helped businesses capitalise on prepaid coupons in an economy where cash is still a preferred mode of payment. While this local innovation is great, it does prove to be a hindrance for Cape Town startups to gain traction globally.

In this article, we examine closely the Cape Town startup ecosystem, its advantages and disadvantages, and major players…

Most successful startups of Cape Town

Mellowcabs (@mellowcabs): The transportation landscape is sure seeing a transformation with the launch of on-demand apps, but Mellowcab isn’t just another Uber clone. It has a unique business model whereby it offers free rides and earns money through banner advertising. The cabs are 100% electric minicabs with no pedaling required. Founded by Neil du Preez, it has already won several accolades including Official World Design Capital 2014 Project and International Smart Cities Challenge Cup. Apart from banner ads, the cabs also have a tablet which triggers promotional offers and specials when it approaches certain stores and restaurants.

Nomanini (@Nomanini): It launched in 2011 and is one of the most successful startups in South Africa. Nomanini offers pre-paid vouchers, enabling transactions in cash-based informal sectors. It was founded in 2011 and raised capital from several investors including eVentures Africa Fund, Rockbridge Investments Limited and Goodwell Investments.

Snapplify (@Snapplify): It is an eBook aggregator, with a focus on content distribution and publishing on mobile. It was launched by Wesley Lynch and is based in South Africa, London, and New York. It has over 100,000 aggregated titles and 600+ resellers. It has partnered with leading publishers such as Macmillan, Penguin Random House, Oxford University and Pearson to aggregate e-books. The startup is backed by AngelHub Ventures.

Ekaya (@ekayaco): It is a technology startup in the property rental space, helping property owners and tenants to find each other. The company was founded by Justin Melville, Ruark Ferreira, and Rudolf Vavruch in 2013 and has graduated from the 88mph Accelerator Program. Some of the leading tech entrepreneurs have invested over R2M in the startup.

Wumdrop (@Wumdrop): The startup offers personalised courier services to users, whereby they can request for packages to picked up and dropped off to specific locations. The app was launched by Roy Borole and Simon Hartley and saw exponential growth. Future plans include making the service available to e-commerce stores that can choose Wumdrop as a delivery method.

GoMetro (@GoMetroApp): The app offers transport data for free. Founded by Justin Coetzee, it has won several accolades including an MEF Award at the Global Mobile Forum for the Best Innovation in a Growth Market. GoMetro has a also launched a new website, GoMetro Mini meant for older mobile phones, in all of South Africa’s 11 official languages.

Advantages of starting in Cape Town

With the availability of capital, talent and supporting organisations, Cape Town startups have much to rejoice about. We take a look at the advantages of starting up in Cape Town below:

Education: Another key driving force of startup innovation is the presence of educational institutes that nurture it. Cape Town has four tertiary institutions, as mentioned by Avril, out of which the University of Cape Town has one of the highest ranking MBA programs. A number of local universities in the region also receive research funding from technology companies such as Samsung that funded a mobile development lab at the University of Cape Town. Nokia, Microsoft and Berlin-based institute Hasso-Plattner also fund research in the region.

IT infrastructure: Cape Town is one of the most important IT hubs in the African continent. In 2011, the city completed a 500 km optic fiber network project, which provides broadband services at a lower cost. The city of Cape Town has the highest number of successful IT companies on the continent.

Startup organisations: The development of Cape Town’s startup ecosystem is also due to the presence of a number of local initiatives that support startups. Some of these include Bandwidth Barn, CodeX, Silicon Cape, RLabs, and IBM Innovation Center.

Disadvantages of starting in Cape Town

Avril tells us that the reason Cape Town may not be an ideal startup destination could be its location, “The city of Cape Town is quite far from the other metropolitan cities, Johannesburg and Durban, where much of the manufacturing takes place.”

We take a look at some other reasons below:

Lack of a global focus: Startups in Cape Town do not look towards the global markets when developing a startup, and focus solely on solving South African problems. As a result, it also becomes difficult for them to attract investment from other parts of the world.

Selling to the wrong market: Another disadvantage of developing products solely for the African market is the size of the market. While most startups in South Africa are developing mobile technologies, the presence of such technologies among their target market is not as high and does not have as much disposable income.

Legal issues during exit: Startups created in South Africa cannot leave the country easily as the government does not wish to let go of tax income. These measures make it difficult for startups to realise global exits.

Impact Amplifier (@ImpactAmplifier): It is an incubator for high-impact startups bringing about environmental and socio-economic change in Africa. It also acts as a consultant for big businesses. It supports startups at any of the three stages – pre-investment while raising investment and post-investment.

88mph (@88mph_Africa): It an accelerator as well as an investor in startups in the mobile and web space. It has invested in 36 companies between 2011 and 2014. Some of its portfolio companies include Ekaya, Zapacab and Graph Flow. Startups are given access to tech hubs and mentors across Africa. As of June 2015, the accelerator announced it would focus on its existing portfolio companies. We will keep checking its website for updates!

AngelHub Ventures (@AngelHubZA): It started as AngelHub, a network of angel investors and later, angel investors Kevin Harris and Michael Jordaan upgraded it to a VC firm. Some of its notable investments include Go Metro, Snapplify, and AmaLocker.

4Di Capital (@4DiCapital): It is an early stage technology fund, that focuses on mobile, web and enterprise sectors. The startups in its portfolio include SMEasy, Bloodhound and HealthQ.

Knife Capital (@KnifeCap, @KeetvZ): It is a South African venture capital firm invests in technology companies in high growth markets. They have seen exits of startups such as iKubu and Garmin. Some of their current portfolio companies are Fundamo, CSense, and Click2Customers.

Bandwidth Barn (@BandwidthBarn): A subsidiary of CiTi, it provides startups with a number of resources such as networking, physical infrastructure, and funds. It promotes entrepreneurship and helps companies develop world-changing products.

Twenty Fifty (@2050co): It provides startups with facilities and resources that help them thrive. Its aim is to build a community of individuals working in disciplines such as design, media, business, and technology.

Project codeX (@project_codeX) : It is an initiative by tech journalist Elizabeth Gould, former CEO of First National Bank Michael Jordaan, serial entrepreneur Dave Weber and Cara Turner. Its goal is to help students learn to code with the help of a 9-5 apprenticeship program, whereby they solve daily coding exercises and interact with industry professionals and mentors. While the course has a fee, students can pay it off by working for one of its partner companies such as Google, Rethink Education, Silicon Cape, and Ogilvy.

Silicon Cape (@SiliconCape): It is a community of startups, entrepreneurs, investors and tech professionals that share resources and information about the Western Cape of South Africa. The purpose of the organisation is to promote and foster entrepreneurship. It has been a significant driver of networking and startup events in the region, as well as investments.

The Cape IT Initiative (@Cape_IT): Also referred to as CiTi, it is a non-profit organisation that supports entrepreneurs and startups in the Western Cape. Its focus is on tech-enabled businesses in the financial, government and retail sectors. It has received multi-million rand funding from Telkom for its initiatives.

Tech4Africa (@Tech4Africa): It is a mobile and web conference that also hosts a startup competition, Ignite. The competition offers startups a chance to present their ideas to mentors, investors, decision makers and influencers. This year’s conference took place in October and featured speakers from Microsoft, Barclays, TechStars, and Gumtree.

Startup Grind Cape Town (@StartupGrindCPT ): An international startup organisation, it hosts monthly events for startups. The events are aimed at helping entrepreneurs establish meaningful connections and get inspired for their own startup journey. It has two other chapters in South Africa, in Durban and Johannesburg.

DEMO Africa (@DEMOAfrica): It is an annual pan-African competition and conference by LIONS@FRICA. With partners such as US Department of State, Microsoft, Startup Weekend and Nokia, LIONS@AFRICA is an initiative to promote innovation in Africa.

Startup Weekend Cape Town: A well-known startup event, Startup Weekend is present in three South African cities, namely Cape Town, Durban, and Johannesburg. The three-day event is all about action and helps startups develop their product, as well as get mentoring, feedback and network.

Publications for startups in Cape Town

Ventureburn (@Ventureburn): It is owned by Burn Media, a multimedia publishing house. It covers startup news all over the world, with a special focus on emerging markets.

Entrepreneur Magazine (@Entrepreneur_SA): It is a hugely popular South-African magazine. It is a good online resource for startups and entrepreneurs, for general information and tips.

Cape Town has all the makings of a successful startup ecosystem, with the easy access to capital, startup support, accelerators, events, education, and talent. However, startups in this bustling city need to develop a more global approach and there is also a need for government to better facilitate this.

We would like to thank Avril Harvey (@AvrilHarvey1) of Impact Amplifier, for giving us invaluable insights on Cape Town’s startup ecosystem.